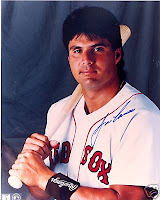 Get your Jose Canseco Autographed Oakland A's White Majestic Jersey Inscribed "88 AL MVP", by clicking on the jersey on the left.
Posted by Baseball Ruben at 22:06