A quick pre-emptive note:  I realize how bad some of these will look at the end of the year. I’m sure I have some last place teams that will end up making the playoffs, and I have some division winners who won’t contend.  That’s ok. It happens to all the forecasters every year.  (here are last year's ESPN forecasters predictions.  None of the 31 got all the division winners. Six picked the Astros or Royals - neither of which made the playoffs - to win the World Series.  Almost half (15) had either the Indians or Cubs missing the playoffs. Somehow only FOUR of their 31 "experts" managed to correctly guess the Dodgers would win their division, Exactly one had Cleveland going to the Fall Classic.... and picked the Giants to beat them there)

Read more »
Posted by Baseball Ruben at 21:12 No comments:

Out of the Park Baseball 18, Now available worldwide

As mentioned previously, OOTP18 has now been released. (Get your copy here).  I have started playing the 2017 season, as manager of the Red Sox, and incredibly this game seems better than the previous versions.  (I am astounded every year on how they manage to make such a great game better).  I’m only one week in, but already loving how the game is playing out.


The first thing I did (while winning over John Farrell detractors everywhere), was name myself manager of the team.   The notoriously tough Boston media didn’t waste any time proclaiming that “Ruben is over his head” (I’m looking at you Pete Abraham!). 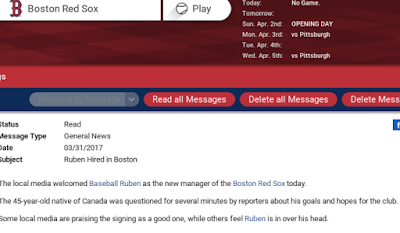 But I’m determined to prove them wrong, and got off to a first start, even getting Mookie Betts to be named AL player of the week, the first week of the season.

I look forward to continuing to simulate this season, and will post updates here and on twitter occasionally.

Below is the full press release where you can read all about this game.  I do strongly recommend that any baseball fan who enjoys playing games to get this.

Out of the Park Baseball 18, an Official Licensee of MLB.com, MLBPA, and MiLB.com,
Now Available Worldwide
Follow-up to Metacritic’s 2016 PC Game of the Year features a new Challenge Mode, Online Profiles and Leaderboards, real 2017 major and minor league rosters, historic Negro League teams, improved 3D mode, new tournaments, and much more
Out of the Park Developments, an official licensee of MLB.com, the MLBPA, and MiLB.com, today announced that Out of the Park Baseball 18 is now available worldwide. The follow-up to the acclaimed Metacritic 2016 PC Game of the Year includes several exciting new features and a treasure trove of deep improvements to its award-winning gameplay.
Out of the Park Baseball 18 sells for $39.99 and is available on Steam and through the company’s website at these links:
http://store.steampowered.com/app/465650/


http://www.ootpdevelopments.com/out-of-the-park-baseball/
For the first time, Out of the Park Baseball 18 introduces an all-new Challenge Mode. This allows series newcomers to enjoy a powerful way to learn the intricacies of this deep strategy title, while driving community engagement for all users via the creation of online profiles to share accomplishments on new leaderboards. The Challenge Mode is just the beginning of an all-new, long-term expansion of OOTP’s online platform -- more will be unveiled during the course of the 2017 baseball season.
Out of the Park Baseball 18 also includes:
OOTP 18 runs on PC/Mac/Linux and, like last year, it features the American League and National League logos, the World Series trophy, official logos and jerseys for all 30 MLB teams, over 150 Minor League Baseball league and team logos, and historical MLB logos.
“Fans have been overwhelmingly positive about Out of the Park Baseball 18 since it was announced in January,” said lead developer, lifelong baseball fan, and Out of the Park Developments CEO Markus Heinsohn. “We’re thrilled to deliver a game that will allow us to dramatically expand our online community and delight a new generation of fans.”
“Out of the Park Baseball has been setting the bar high for sports management games over the past 18 years, and this year’s edition is no different,” said Out of the Park Developments CMO Richard Grisham. “Every time I think they can’t top last year’s version, they do it again. I tip my cap to the hardest-working development team in video games.”
About Out of the Park Developments
Out of the Park Developments is the developer of the award-winning OOTP and MLB Manager series of baseball management simulations, Franchise Hockey Manager, and Beyond the Sideline Football. German-based OOTP Developments was founded by Markus Heinsohn and Andreas Raht in 1999. OOTP Developments has consistently produced games that have met with critical acclaim, including winning Metacritic's coveted “PC Game of the Year” for the 2016 version of OOTP and "Game of the Year" for the 2007 edition of OOTP, which remains the second highest-rated PC game on Metacritic of all time. Further information on the company and its games is available from the OOTP Developments website, http://www.ootpdevelopments.com
About MLB.com
Established in June 2000 following a unanimous vote by the 30 Major League Baseball club owners to centralize all of Baseball’s Internet operations, MLB Advanced Media LP (MLBAM) is the interactive media and internet company of Major League Baseball. MLBAM manages the official league site, MLB.com,and each of the 30 individual Club sites to create the most comprehensive Major League Baseball resource on the Internet. MLB.com offers fans the most complete baseball information and interactivity across computers and mobile devices, including up-to-date statistics, game previews and summaries, extensive historical information, online ticket sales, baseball merchandise, authenticated memorabilia and collectibles, fantasy games, live full-game video streaming and in-progress and on-demand highlights, live and archived audio broadcasts, Gameday pitch-by-pitch application, Statcast tracking technology, around-the-clock hosted and specialty video programming, complete blogging capabilities, console and mobile video games and the award-winning At Bat and Ballpark mobile applications. MLBAM powers more live events across the Internet than any other company in the world.
Major League Baseball Players Association
The Major League Baseball Players Association (www.MLBPLAYERS.com ) is the collective bargaining representative for all professional baseball players of the thirty Major League Baseball teams and serves as the exclusive group licensing agent for commercial and licensing activities involving active Major League baseball players. On behalf of its members, it operates the Players Choice licensing program and the Players Choice Awards, which benefit the needy through the Major League Baseball Players Trust, a charitable foundation established and run entirely by Major League baseball players. Follow: @MLB_Players; @MLBPAClubhouse; @MLBPlayersTrust
Posted by Baseball Ruben at 15:54 No comments:


Instead of the usual boring forecasts that I've seen projecting a Chris Sale Cy Young, Mookie MVP, and a Benintendi Rookie of the Year on the way to the Red Sox winning the division,  I have come up with a list of ten unexpected predictions for the Boston nine this year:


1. By middle of season Drew Pomeranz will be trusted as much as Porcello
2. We will get at least 10 starts from arms other than the six currently vying for rotation spots (Sale, Price, Porcello, Pomeranz, Wright, Rodriguez)(1)(2)
3. We will have a lights out bullpen by the end of summer – Kelly/Thornburg/Smith handing ball off to Kimbrel will be an opposition’s nightmare if they’re trailing in the 7th.
4. Any injury to an outfielder will expose how little organizational depth there is there
5. Betts will not get as many MVP votes as last season
6. Swihart will be a big offensive contributor by mid season
7. Brandon Workman will be on the post-season roster
8. Sandy Leon won’t
9. Mid season there will be talk about winning 100 games
10. We won’t
Check back in October to see how many of these I got wrong. I’ll be surprised if it’s less than 8 or 9.

(1) This isn’t even close to a bold prediction.  Last year our top 5 starters (in games started, not as projected on Opening Day), started 133 games.  Pomeranz and Joe Kelly were 6th and 7th most used starters, and that still left ten games started by Owens, Sullivan and Elias.  The previous season, after the 124 games started by Miley, Porcello, Kelly, Rodriguez and Buchholz, we needed 20 more starts between Owens and Wright, which still left another 18 for Masterson, Hill, Barnes, Breslow and Brian Johnson.  Don’t get me started on 2014.  And even in 2013, when everything mainly went right, we still needed 18 starts by Allen Webster, Aceves, Workman, Morales and Wright.  You can never have too much pitching!


(2) I wrote the above before the Price news broke.  I hate being right already about too much pitching, but I’ll stick to the general statement that we’ll need more than 10 starts from pitchers other than the six who pitch the most games, whoever they may be.
Posted by Baseball Ruben at 18:19 No comments: