In case you've been living under a rock and hadn't noticed, Jackie Bradley Jr. is finally hitting the way we all thought he would when he first got called up in 2013. Despite gold glove level centerfield play, his .189 and .198 batting averages his first two seasons kept him from sticking in the majors.  In fact, he had a historically bad offensive start to his career. And lots of people were just hoping that he could be close to an average hitter to keep his glove on the field.  He spent most of the early part of the 2015 season in Pawtucket, only starting a dozen games for the Red Sox before August. But then he came up for good and hit over .350 and showed some power, hitting 5 home runs that month, more than he had in total in two and a half part seasons prior to that.  Unfortunately he regressed a bit in September and a lot of naysayers were saying it was a fluke / pitchers learned how to adjust to him / it wasn't sustainable etc.

Read more »
Posted by Baseball Ruben at 21:17 No comments: 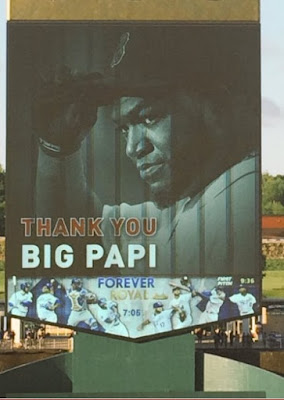 The Big Papi Farewell Tour continues, as today is the Red Sox last regular season scheduled game at Kauffman Stadium in Kansas City. Unless (until!) they meet in the playoffs, this will be the last chance for Royals' fans to see David Ortiz.  This hasn't been one of his favorite places to hit, as he's sporting a career .260 average there, and last night was no different as he didn't reach base in a 8-4 Red Sox loss.  But prior to the game, the Royals presented him with a chair from the 2013 All-Star game in which he was the American League's starting DH, in a game the AL won giving them home field advantage in the World Series, and allowing the Red Sox to celebrate that year's championship at Fenway Park for the first time in 95 years! 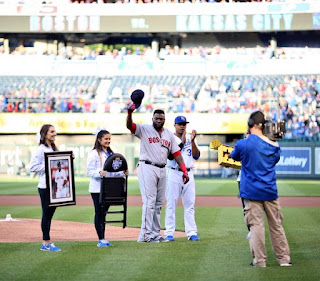 Here is video of the presentation.

Posted by Baseball Ruben at 17:08 No comments:

Big Papi Farewell - Cigars from the South Side

Unlike the NL parks that started his farewell tour, Big Papi is familiar with US Cellular Field,  having played 67 regular season games there throughout his career.  He also played 2 postseason games there, getting 3 hits including 2 doubles, during the 2005 ALDS.

Yesterday he was the difference in the game with a 2 run home run in the 5th inning which gave the Red Sox a 3-2 lead, and then he added an RBI single in the 7th in a game Boston won 5-2.

In spite of that, the White Sox still honored him prior to his final game here, as they presented him with a humidor full of cigars.  Of course.... they weren't Cubans but Dominicans!

Here you can see video of the presentation

Posted by Baseball Ruben at 09:36 No comments: