As mentioned last time, I went to Saint Marys, Ontario to see this year's Canadian Baseball Hall of Fame induction. What a great event it was. In spite of missing Pedro Martinez (due to a medical condition), Fergie Jenkins (due to family's health), and Kelly Gruber (due to being an asshole), it was still a great show.

Shortly after I arrived, the first thing I noticed was how intimate it was. I saw a tent set up with chairs, that I assumed was for the VIPs - inductees, family members, special guests, etc - but quickly realized it was for everyone to sit and enjoy the ceremonies comfortably away from the heat of the sun and the sprinkle of rain that was coming down.


Then, I saw several vendor tables. I recall at Cooperstown there were people on the streets yelling at fans to "come get an autographed ball by Pete Rose! Over here! Only $100 each" or whatever it was, but it was clearly a money grab (speaking of assholes, I hope Mr. Rose claimed income and paid his fair taxes to the IRS this time!). If you tried to take a picture of a player, without lining up and paying the requisite fee, someone would not be happy.  And many shops had authenticated memorabilia, all with price tags to ensure only the most serious of collectors would even consider purchasing it. But in Saint Marys, it was quite the opposite. Players and special guests were walking around mingling with the fans, and reminiscing about stories. And you could get autographed memorabilia for a very reasonable price.

As soon as I walked in I saw Fergie Jenkins' van, but had already heard he wasn't going to be there. Went to one of the vendor tables, and picked up a few souvenirs, including a signed ball by Jenkins, and one by Ryan Dempster (who I obviously became a fan of, when he joined the exclusive group of Canadians to play for the Red Sox, and all Yankee haters loved him after he plunked A-Rod).

I also found some Calgary Vipers merchandise there which is ironic since I can't find any in Calgary.


Then I spotted Bill Lee, and went up to him and we started chatting. This is the third time I've had the pleasure of talking with him. He is a great storyteller and always interesting. I already had baseball cards and pictures of him that he's signed previously, this time I got him to sign his book and got another ball.

Then the ceremony started. Pedro wasn't there, but they had some former Expos who accepted the honour. Fittingly it started with another #45, Steve Rogers, as well as Bill Lee and Bill Atkinson.

Pedro did have a video message for the fans where he apologized for not being able to make it:


Historian William Humber was also inducted. He had a major role in bringing to light the fact that baseball was being played in Canada well before Abner Doubleday "invented" it.  He's also written Diamonds of the North. And is the main reason Canadians can say this:

Then "The Shaker", Lloyd Moseby got up to speak. He was so humble, and you could tell he didn't feel comfortable receiving this recognition. He kept repeating that he felt he didn't deserve it. I can't even begin to give his speech justice, so I'll let you read what Richard Griffin (who was also present) wrote about him.

Some other notes on the weekend:

What are the odds?

Posted by Baseball Ruben at 14:43 No comments: 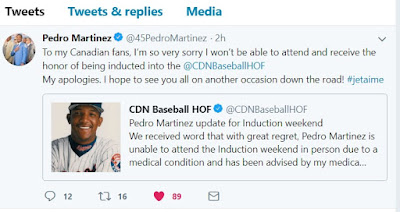 As disappointed as I am, it would be selfish of me to be upset about this. I am more concerned about Pedro and his health.  Mejórate pronto!  Nos vemos la próxima vez, Pedro.
Posted by Baseball Ruben at 15:43 No comments: 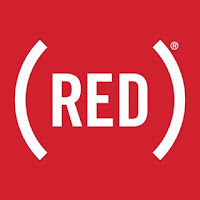 As you can see below, the Red Sox tweeted about the opportunity for fans to receive the ultimate game-day package to raise money for (RED):

For just $10, fans will be entered for a chance to win the following:


Fans can enter today at IfOnly.com/RedSox. But hurry up, as the sweepstakes ends on June 15th at 3 PM PST. For those wanting to not leave it to chance they can also bid on a suite package that fits 20 people, allowing them on-field access and a tour of the stadium. Both packages benefit (RED).  And don't worry, if you can only think of 19 people to go, I know one Canadian who would gladly help you fill up that 20th seat.

This is a great opportunity to win a once in a lifetime experience for any Red Sox fans, and benefits a great cause. (And sorry to my Canadian (and other) readers, but this contest if only open to US residents).

Good luck to all!


Posted by Baseball Ruben at 10:16 No comments: