There have been a flurry of roster moves the last few days.  The Red Sox played Wednesday’s night game shorthanded.  Robbie Ross and Mookie Betts were battling flu-like symptoms, and Brock Holt’s condition was so bad that he wasn’t even at the ballpark. That was a bad time to have an extra inning game, but Sandy “the Lion King” Leon sent everyone happy by walking it off in the 12th.

Right after the game Matt Barnes was put on the bereavement leave, and Noe Ramirez called up to take his place.  This morning we learned that Xander Bogaerts was also placed on bereavement leave and Marco Hernandez came up to take his roster spot.  Now Robbie Ross’ flu worsened and he was put on the DL with Deven Marrero taking his place.  Why an infielder instead of another reliever?  Well, taking a look at the depth chart below will explain this.

The Red Sox were already carrying an extra bullpen arm, since they had the luxury of not needing a 5th starter right away, and have kept Drew Pomeranz on the DL until he is needed (likely on Tuesday).  The extra middle infielder is due to Brock Holt’s flu.  If he’s unavailable, Hernandez will start at SS and Marrero becomes the utility bench guy.  The bench is going to be Holt (flu), Young, Vazquez, Marrero and Selksy.

Here is the current roster/depth chart. Players with a strikethrough are not on current 25, players in brackets are listed a subsequent time in a position other than their primary position.

arrero will go back down when Bogaerts comes off the bereavement list.
Noe Ramirez will be replaced by Barnes when he comes off.
Since our bullpen is back down to seven arms, and we have an extra position player on the bench, to make room for Pomeranz, one of the bench players will go back down.  If Holt is fully recovered from the flu, I suspect it will be Marco Hernandez back to AAA.

And when Robbie Ross is activated (he’ll be eligible on April 13th), Ben Taylor’s cup of coffee will be finished for now.

At least that’s what I expect the plan will be, although injuries and overuse of pitchers may dictate different moves being made over the next week or so.
Posted by Baseball Ruben at 17:32 No comments: 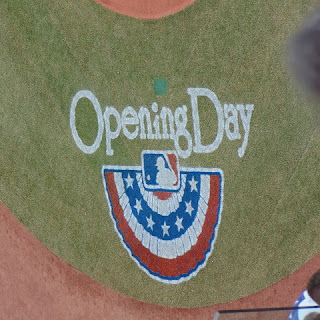 It's Opening Day. I know yesterday was the official MLB Opening Day, but today is the first Red Sox game of the season so now it really counts! By the way, if you don't capitalize "Opening Day", we can't be friends.  It should be a national (both in the US and Canada) holiday.  It IS an official stat holiday for my company (perk of being the owner - I make the rules).

Anyhow, I'm looking forward to it. Not quite as much as the 2014 opener when I was at Fenway to see the banner get raised, but every Opening Day is special.

The Red Sox have finalized their 25 man roster.  Not too different than what I had predicted in mid February.


Here are the guys we get to look forward to as the season starts:

I had Price and Pomeranz also on the roster.  They are both on the DL. I had EdRo starting in Pawtucket but did say he'd be in the rotation if anyone was injured.  Pomeranz seems like a roster move, since they won't need a 5th starter until his DL stint is up.

I had the same first six guys.  Also had included Tyler Thornburg who is on the DL. I thought the 2nd loogy spot would be a battle between Scott and Abad and Scott would win it.  With the Thornburg injury there's room for both.  Ben Taylor was a surprise addition, whose spot was open due to the aforementioned Pomeranz temporary roster move.

No surprises here.  Swihart starting in Pawtucket because he has options.

I had the first six guys.  Thought the last utility spot would go to Josh Rutledge over Marco Hernandez.  Rutledge is on the DL, and with Moreland battling the flu, Steve Selsky is more able to back up first base than Hernandez.

Again, no surprises there.

So, in total I had correctly forecasted 21 of the 25 players on the Opening Day roster.  The ones I missed, Price, Pomeranz, Thornburg and Rutlege are all on the DL.

For Pedroia, this is his 11th straight start on Opening Day.  Guys such as Ted Williams, Jim Rice, Dwight Evans, Wade Boggs and David Ortiz never did that. In fact, if Pedroia starts on Opening Day next year, he'll tie the Red Sox record, currently held by Yaz.

Beni starts in LF.  Hopefully he'll end up a fixture for years to come there, following in the footsteps of Williams, Yaz, Rice and Ramirez, who started 55 Opening Days between them since 1940.

Posted by Baseball Ruben at 09:00 No comments: