Did you know? Catcher’s Interference. I DIDN’T!!!

I wrote a short post on catcher’s interference (CI) some time ago, to educate people that reaching on CI does not impact your on base percentage (OBP).

Unfortunately, it has come to my attention (through an outstanding Sabermetrics course that I’m taking online) that in that post, my explanation of how to score it was… WRONG!  (sorry!)  No way to sugarcoat it, I’ve always been doing it incorreclty. I use my own spreadsheet system that takes the scoring from a game and compiles all individual
and team stats and I goofed on this one.*

By the way, I still believe that intuitively it should be counted as a stat the same as a walk or hit by pitch. The counter argument is that you don’t know what would have happened without the CI. He may have been out anyways, so you don’t want to credit the batter for something he didn’t “earn”. But I think this counter argument can be used for HBP as well. Batters aren’t (usually) trying to earn getting on base by being beaned, but I digress.

* Note: Today there are several scoring apps available, so individuals don’t really need to know the rules that well, just mark it as a CI and the app will take care of calculating all the stats for you. Some of the best ones includes iScore as well as several others.

Posted by Baseball Ruben at 21:26 No comments:

Email ThisBlogThis!Share to TwitterShare to FacebookShare to Pinterest
Labels: Scoring

In what was a disappointing draft for Alberta baseball players anxiously waiting to get the call that they were selected, only one player from the Wild Rose Province was drafted.  The Boston Red Sox used their 14th round draft pick to select Calgary native Jordan Procyshen.  Procyshen, a catcher, was drafted out of Northern Kentucky University. A quick summarized scouting report on this 21 year old,  is that he is a very good defensive catcher with a strong arm, and an excellent power hitter.

Read more »
Posted by Baseball Ruben at 23:40 No comments:

With the first 2 days of the draft done, most of the big names have now been taken.  There are still 30 rounds to finish today, so several players who are only familiar to local audiences still have a chance to be drafted.

As far as the Red Sox, they took high schooler Michael Chavis with their first pick.  Chavis is a shortstop who projects more to be a third baseman in the Sox organization. He knows how to rock a bowtie (see pic above) and for some amusing reads, take a look at his twitter history at @michaelchavis11.  A few picks later they selected another high schooler, pitcher Michael Kopech. He is a righty who just turned 18 two months ago, and can already hit 97 MPH on the radar gun. With their last pick of the first day, they selected University of Indiana first baseman, Sam Travis.   For a full list of the Red Sox draftees, take a look at this draft tracker.

On the local front, only three Canadians were taken in the first 10 rounds. As expected, Gareth Morgan was the first Canuck taken, as the last pick of Day 1 - number 74 overall, by the Seattle Mariners.  Two other Canadians, both from Ontario, have also been drafted so far.  Today hopefully some of the local Alberta players will be drafted in later rounds. I will post an updated with any news on these players after the draft is complete.

To stay up to date on all the prospects, Baseball America publishes an annual prospect handbook.  You can get it here from Amazon:

Posted by Baseball Ruben at 09:56 No comments: 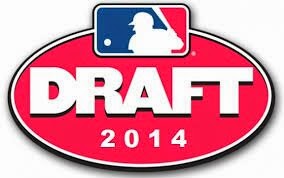