Being a National League city, David Ortiz has not played many games at Turner Field. However, in his 13 games started there he has hit seven home runs, including a big 3 run shot that had the Red Sox come back from 5 runs down in a huge comeback victory on Memorial Day in 2014.

In the first game of this two game series, the game was decided by a home run, but it was Jackie Bradley Jr, the hero in the 1-0 victory, as Ortiz just had a pinch hit appearance.  In the second game, the Braves honored Big Papi with a video tribute.  Fans gave him a very loud ovation, and when Ortiz came out of the dugout to tip his cap it got even louder. You can watch the video here.  Unfortunately that was the only appearance of the day for Ortiz, and barring a miraculous World Series berth for the hapless Braves, the last time Ortiz will play in Atlanta.

Look here for the list of other team's farewells to David Ortiz.  And get your own Papi Farewell Tour tshirt here.

Posted by Baseball Ruben at 13:46 No comments:

In what was the first of many stops on David Ortiz’ farewell tour, the Houston Astros honored Ortiz with a Stetson cowboy hat in a pregame ceremony.  Astros fans aren’t personally very familiar with Ortiz, as he’s only started 12 games at Minute Maid Park in his career, since Houston was in the National League for most of it, but of course they are well aware of his accomplishments and gave him a nice ovation.  His biggest moment in that park was probably in the 2004 All Star Game when he hit a home run off of Carl Pavano, to help the AL win that game and give them home field advantage in the World Series, which, of course, the Red Sox won that season.

Anyhow after the ceremony, the Red Sox went on to defeat the home team 6-2. Ortiz had a quiet night just reaching base once on a walk.

You can see the entire presentation here.

And if you were at the game and want to get your own Papi Farewell tour shirt, you can order it online here:

Posted by Baseball Ruben at 13:16 No comments: 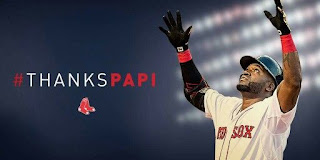 As this is David Ortiz’ final season, his last visit to each visiting ballpark promises to be memorable. It may be the last opportunity for his fans in those cities to see him (other than possibly in the postseason) , and every team has something special planned for him.  Below is a list of dates showing the last regular season scheduled game at each team’s stadium. This list will be updated throughout the season with links to articles about how each team and their fans are honoring this great player.

If you want your own Farewell tour t-shirt click on the images below:

Posted by Baseball Ruben at 12:45 No comments: