The Importance of Winning the Off-Season

It's over. The Anaheim Angels got Shohei Ohtani and traded for Ian Kinsler.

Meanwhile not a lot of changes were seen around Fenway Park.  (editor's note: This article was originally written prior to the Red Sox signing JD Martinez)

Does this mean that the results of the season are a foregone conclusion?  Before getting ahead of ourselves, let's remember there's a reason they play the games on the field during the season, and not in the front office in the winter.


Here is a look at some recent teams that have "won" the off-season, and how they fared:

2014-15 Red Sox offseason
After winning the World Series in 2013, the Red Sox collapsed and ended up in last place in 2014. The Red Sox wasted no time ensuring they'd escape a simar fate, by signing both Hanley Ramirez and Pablo Sandoval within 24 hours of each other before November was over, committing up to $205 million (if Hanley's 2019 option vests) between the two. Well, instead of finishing in last place with 71 wins, these moves helped them finish in last place with 78 wins. And they're still paying Sandoval's salary while he's playing back in San Francisco.

2013-14 New York Yankees
In what was a surprise to nobody, after an 85 win, 3rd place season, Yankees ownership opened up their wallets in a big way, committing close to a half BILLION dollars in one off season.  This was spread out over several players including: Jacoby Ellsbury - coming off a good season where he led the league in steals and was 15th in MVP voting - getting $153 million; Japanase sensation Masahiro Tanaka (24-0, 1.27 ERA in Japan) for $155 million; Brian McCaan who had been an all-star catcher seven of the past eight seasons for $85 million; Carlos Beltran who despite his age, was coming off back to back all star seasons, and rewarded with a $45 million 3 year contract.  All these moves resulted in the Yankees finishing the 2014 season with one less win and several hundred million dollars less than they had in 2013.

2013-2014 Texas Rangers
The Yankees weren't the only team that spent money improving after a dissapointing 2013 season. As you may recall, the Rangers almost won the World Series in 2011, twice being one strike away from the Championship. And they were itching to return. Unfortunately, after losing the division in 2012 by a single game, they were eliminated in the wildcard match, and in 2013 they missed the playoffs by one game. If either season they had won one extra contest, they might have had a chance to go back to the World Series and redeem themselves. So they made a few moves, including trading for an in-his-prime, 29 year old Prince Fielder, and Shin-Soo Choo, who was coming off one on his best seasons, where he was 12th in MVP voting. So, how close were they to winning the division in 2014 after these moves?  How about 31 games! They fell all the way from 91 wins to 67.

2012-13 Toronto Blue Jays
The Blue Jays won 73 games in 2012, and wanted to make some changes to be able to compete. So they made some trades and signings which netted them Melky Cabrera, Jose Reyes, Josh Johnson  Mark Buerhle, and RA Dickey. Dickey was the reigning Cy Young winner, and Mark Buerhle had been the staff ace in both Miami and Chicago. Meanwhile Josh Johnson was only 2 seasons removed from a 5th place Cy Young. This pitching staff along with the improved offence that already featured sluggers such as Jose Bautista, Edwin Encarnacion and Colby Rasmus had Canadian fans excited for the upcoming season. But the improvement they saw on the field was minimal, as the 2013 Jays increased their win total to just 74 games.

2011-12 Florida Marlins
It may be hard to believe, but there once was a time - long before the worst defensive player in the history of the sport took over the team - when the Marlins paid players and tried to compete.  Heading into 2012, Jeffrey Loria opened up his wallet, and spent about $200 Million on Heath Bell - a top closer coming off three straight 40+ save all-star seasons - Jose Reyes, an all-star shortstop, reigning batting champion, and premiere leadoff hitter, and 4 time all star starter Mark Burhle.  The net effect of these moves, is they lost three more gams in the 2012 campaign than they had in 2011, finishing last both seasons.

2010-11 Orioles
After the 2010 season, the Orioles - who had finished with a measly 66 wins and scored the second fewest runs in the league - tried to improve on their offence. And that they did! They added Mark Reynolds, Derrek Lee and Vlad Guerrero to give them some pop.  These moves certainly helped, as they improved their win total all the way up to.... 67! Offseason winnings garnered them a whole extra victory.

2010-11 Red Sox
The only reason the Orioles' moves weren't more herladed was that they weren't even the team with the biggest paper improvements in their own division. The Red Sox traded for Adrian Gonzalez and signed Carl Crawford within a week. They also signed Andrew Miller, and some other bullpen arms after the 2010 season. It wasn't just Red Sox fans that thought this would put them over the top, most analysts had them as favorites after their off-season moves.
One typical artcile I found said:


"Red Sox are the clear-cut winners of this offseason. Adding 1B Adrian Gonzalez alone may have them considered among the top teams in the American League. But the additional signing of OF Carl Crawford may have made them favorites in baseball.
…adding RP Dan Wheeler and former White Sox closer Bobby Jenks. … the Red Sox may have the best bullpen in baseball when it’s all said and done"

As you may recall, the 2011 season ended with their manager getting fired.  And only getting rid of AGon and Crawford late in the 2012 last place season helped get the franchise back on its feet.

So, what is the correlation between winning the off-season, and regular season improvements? If the above examples didn't make it clear, here is a very scientfic looking chart that I just made up: 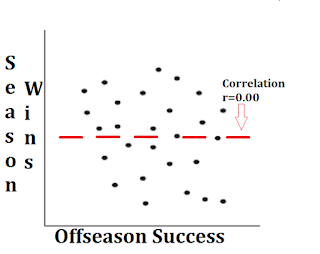 If you don't understand advanced statistics, or correlation coefficients, a better explanation of how teams that have perceived success in the offseason are more likely to win games once the season starts is explained here.

Anyhow, in spite of winning the off-season,historically not being a precursor to having a good regular season, I am very glad that JD Martinez is now a member of the Boston Red Sox! Let the games begin.
Posted by Baseball Ruben at 07:00 No comments: