In spite of David Ortiz having started his MLB career with the Twins, it was Seattle that signed him to his first professional contract. Back in 1992, the Mariners signed 17 year old David Arias as an amateur free agent.  But in the summer of 1996, they were a few games out of first place and wanting to increase their productivity from 3rd base, traded a player to be named later for Minnesota's Dave Hollins.  A few weeks later Ortiz was the player named to finalize the Hollins trade. The trade boosted the Mariners lineup a bit, but they still ended up 3 games out of a playoff spot.  Still, it was fairly unnoteworthy at a time, not many fans lamented that trade.  Alas, what could have been having Ortiz join the Mariners lineup in the late 90s with ARod, Griffey, Edgar and the rest.


Anyhow, prior to Wednesday night's game at Safeco the Mariners honored Ortiz and among other things gave him a framed copy of that first contract he signed. They also gave him a 34 pound salmon and some other stuff. 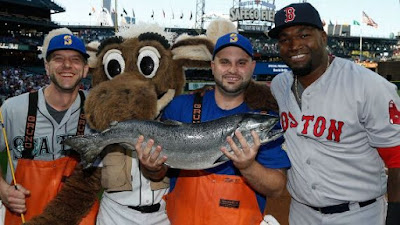 You can watch the whole video by clicking below: 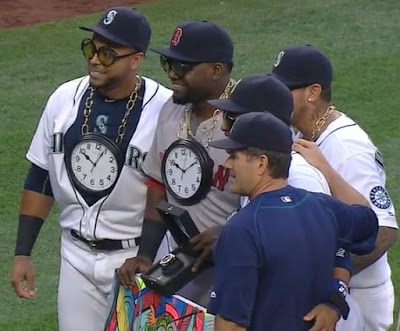 Posted by Baseball Ruben at 06:00 No comments:

It's safe to say that this past weekend was the last time David Ortiz faced the Angels in his career. (In spite of Mike Trout, they ain't making the playoffs).  And he is probably lamenting that, as he has loved playing in Anaheim and against the Angels in his career, having many memorable moments. His first home run as a Red Sox came here in April 2003, when he pinch hit for Jeremy Giambi in the 14th inning and took a 2-0 pitch deep for the game winning home run (alas not a walkoff as those are infinitely harder to hit when you're on the road!).  And of course, no one will ever forget his extra inning Series winning walk off home run (pictured above, video heer)in the ALDS vs. the Angels in 2004 that helped propel the Red Sox to their first Championship in 86 years.  He also won the 2010 home run derby at Angel Stadium, defeating former and future teammate Hanley Ramirez while putting on a show hitting 32 balls out - which matches the total number of home runs he's hit against the Angels in 117 career starts.

Before Thursday's night Series opener, he was presented with a customized portrait by Mike Trout (doing his best Papi impersonation, wearing a big gold chain around his neck) and Albert Pujols which can be seen below:
You can enjoy the full video here
Posted by Baseball Ruben at 06:00 No comments: