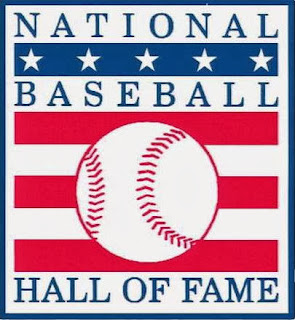 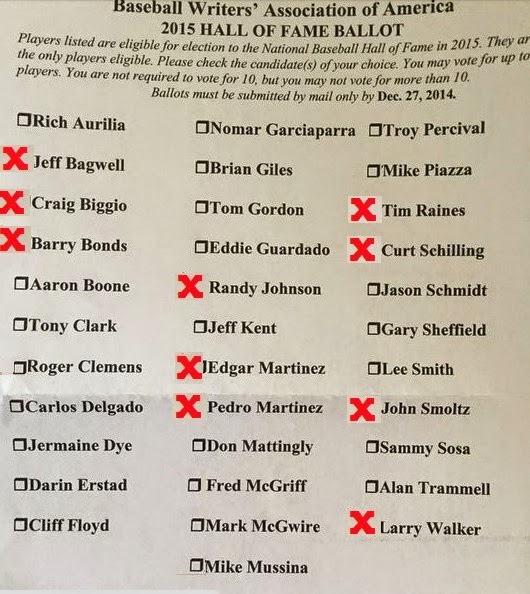 Posted by Baseball Ruben at 12:43 No comments: 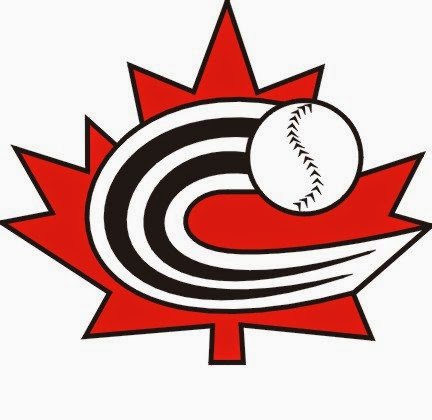 Read more »
Posted by Baseball Ruben at 22:31 No comments:

As mentioned previously, I will be posting my Hall of Fame ballot in three pieces. For each player, for now, I’m just giving a binary yes/no without regard to the 10 person limit per ballot. In my last post I will whittle it down to just 10 if there are more (there will be!). Today's column deals with former Red Sox players.
(By the way, this and all other columns will list players alphabetically)

No need to rehash the arguments that I made last year on which of these should be in and out. And they haven't done anything to change their credentials, nothing has evolved (maybe Mr. Schilling was right) since last year, so no need to change my mind on any of them.

Tony Clark - I remember the excitement of my 6 year old when he heard we had acquired Clark in the 2001-02 offseason. And why not? He was a reigning all-star and after a disappointing ending to the 2001 season, the Red Sox were ready to make a move in 2002. Well he didn't even slug .300 for us that year and luckily we kept Brian Daubach around to provide some pop from the first base position. No, Tony Clark is mainly remembered by Red Sox fans for two heart stopping at-bats in the 2004 ALCS: In Game 5, after the Red Sox had scored twice in the 8th to tie up the game, Clark came up to bat with Ruben Sierra on 1st base and 2 outs in the 9th. He hit a line drive to right field which would surely have scored Sierra from 1st, and as everybody at Fenway held their collective breath, it bounced over the short right field fence for a not-ground-rule double, holding Sierra at 3rd. Everybody at Fenway was able to breathe again, and then Miguel Cairo popped out to 1st base to end the threat.  (side note: This game was over 10 years ago and I remember it like it was yesterday. Thank you again 2004). The very next day he came up to bat in an even more potentially gut-wrenching situation. Bottom of the 9th, Sox leading 4-2. Two outs and two men on base. A home run by the Thermos would give the Yankees a walk-off Series win. Confession time: to this day I still have not watched that at-bat. The Boone scars were still fresh and I had to excuse myself from the room and find something else to do to stay occupied. All I know is that he did not hit a home run and the Red Sox won the game. Anyhow, I'm rambling, as I oft too when reminiscing about 2004. What am I writing about? Oh, yeah, is Tony Clark a Hall-of-Famer? No, no he's not. I could go look up some stats to make the case that he was barely above mediocre throughout his career, but you already know that, nobody is seriously thinking of voting for him. NO

Cliff Floyd - He'll show up in my list of  Hall of Fame candidates with Canadian connections as he spent five season playing in La Belle Province for the Expos.  And he only called Fenway Park home for 2 months at the end of the 2002 season, but he did play like a Hall of Famer during that stretch. He slugged 561 and had an OPS+ of 142 after getting traded for Sunny-Woo Kim.  But nobody really remembers him as a Red Sox player.  He was a Marlin for 6 years and basically hit to a 300/400/500 slash line each season, as well as helping them win their franchise's first ever World Series. That's a pretty good sample of his career, but unfortunately he was barely above mediocre the rest of his career, compiling a 266/346/452 line throughout his other 11 seasons in the league. Even in a non-crowded ballot he wouldn't get a lot of attention. NO

Nomar Garciaparra- It hurts just talking about Nomah! By his 4th season in the league he had already compiled an unanimous ROY selection, 2nd place in MVP in his sophomore season, 600 slugging and batting title in his 3rd full year in the league, and had just come off a campaign where he batted .372. Hall of Fame? a first ballot no-doubter. The only question was who would be the idiots who wouldn't cast a ballot for him. But there is a reason voting for The Hall doesn't happen until after the end of someone's career. Ah, what could have been. Makes me sad even thinking about it. NO

Tom Gordon – Not many ballplayers can say that Stephen King wrote a book about them! He was an above average starter for the Royals, before the Red Sox signed him. After a couple of sub-par seasons in the rotation, he became a closer and had an all-star season, garnering 46 saves, with a  FIP of 2.45 and an ERA+ of 173. Like Tony Clark, Red Sox fans also remember him for what he did in the 2004 ALCS. In that same Game 5 mentioned previously, it was Gordon who gave up the two runs in the 8th inning that allowed the Red Sox to tie the game. Outside of Boston, he also had a couple of other all-star season as a closer later on in his career. And he might have been a bit underrated finishing his career with 138 wins and 158 saves. Off  top of my head, not many other pitchers beat both of those numbers. Eckersley for sure and maybe Smoltz (looked it up – Smoltz had less saves), can’t think of many more. He did have an above average career ending with a sub 4 era pitching mainly in the 90s and early 2000s.  But the Hall of Fame isn’t for above average players or it would be way more crowded than it is. Thank you for the memories, Flash. NO

Pedro Martinez – Really, I have to make a case here?? Spoiler alert, I'm voting for him. Definitely one of the greatest pitchers of all time, arguably the best ever.  Sandy Koufax? Please. If he had played in 2000 calling Fenway home, his career ERA would have been 3.74 using Baseball Reference’s neutralized pitching tool. Pedro in 2000? 1.74 in a league where the average ERA was above 5.00.  There were only five pitchers in the entire league with a sub 4 ERA. Pedro’s was the only one below 3.70 and it was almost 2 runs lower. And it wasn’t just one great season. He had a 7 year stretch starting in the heavily PED fueled 1997-2003 era with the following ERAs: 1.90, 2.89, 2.07, 1.74, 2.39, 2.26, 2.22. The lowest league average ERA during that time was 4.81.
Irritates me that a lot of people think the consensus is that Roger Clemens is the best pitcher of this generation. Clemens had a career ERA+ of 143, with a K:BB ratio below 3, peaking at 4.7. Not too shabby. Pedro’s ERA+ was 154 and his K:BB ratio was above 4, peaking at 8.9, and he ended his career with K/9 ratio of over 10.  Not only is that better than Clemens’ (8.5) but it’s higher than Nolan Ryan’s or any active starting pitcher’s. Do I really need to go on? Hopefully my readers knew he was a Hall of Famer before having to look at these numbers. YES

John Smoltz – Came to Boston towards the end of his career and started a handful of games, posting an ERA north of 8 before being released. But it’s not his time in Boston that will build his resume for Cooperstown, but rather the 20 previous seasons he spent in Atlanta.  And what a career he had there! Along with Greg Maddux and Tom Glavine, he was the third member of a dominant pitching rotation that got the Braves to the postseason 14 consecutive seasons. He had a five year stretch in the late 90s as an excellent starter. He was also a fantastic closer for  three straight years after returning from an injury. And then as a 38 year old he went back to starting and all he did the next 3 seasons is compile a 44-24 record with a 3.22 ERA. He finished with 213 wins and 154 saves in the 3+ years he was a closer and an overall ERA+ of 127, His case isn't quite as open and shut as his teammates', but he should get in. YES

My next post will cover the Canadian players and those that played in Canada.  Stay tuned....

Posted by Baseball Ruben at 08:00 No comments: