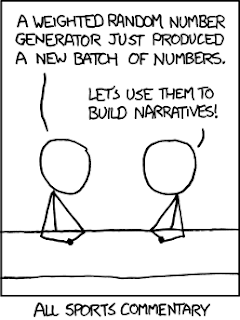 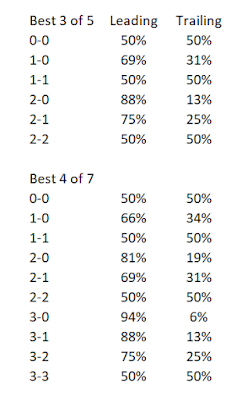 Posted by Baseball Ruben at 16:00 No comments:

Read more »
Posted by Baseball Ruben at 17:55 No comments:

A whole lot more than you may think, Mr. Shaughnessy!

Near the end of the season, Dan Shaughnessy, who is somehow still employed by the Boston Globe, tweeted that the Red Sox bullpen was ranked first by WAR, and that tells him everything he needs to know about WAR.

WAR says the Red Sox have the best bullpen in baseball.
I rest my case
— Dan Shaughnessy (@Dan_Shaughnessy) September 25, 2018


His implication is that this is a made up stat that only nerdy geeks can determine on their supercomputers and it’s not indicative of anything. I mean, everyone knows how bad the Boston bullpen is, and there’s near universal agreement that it’s our Achilles heel heading into the playoffs. So any stat that shows it as being good is obviously flawed.

Sigh. 🙄 Where to start?  First of all, as the second most famous #45 to our readers would say, this is #FakeNews. The bullpen is actually ninth in WAR according to Fangraphs. Ok, well #9 is still pretty good, and this bullpen obviously isn’t, so PIG’s point stands regardless. {Sidebar: I HATE the CHB moniker for Dan Shaughnessy. It originated with Jurassic Carl (whose nickname I DO love), but it is somewhat homophobic and has no place in today’s world (unlike dinosaurs….), so I prefer to call him Pigheaded Irrelevant Guy, or just PIG for short}. But, what PIG fails to take into account (or did, but intentionally ignored so that the conclusion would fit in with his agenda), is that this is a season long stat. And in the first half Boston did have a pretty lights out bullpen: Craig Kimbrel was an all-star with a 1.77 ERA at the break. Joe Kelly, Bobby Poyner, and Matt Barnes had ERAs of 1.73, 1.69 and 1.95 respectively at some point in June.  Carson Smith was a reliable 8th inning option until he had a season-ending injury. Hector Velazquez was 5-0 as a long reliever.

The pen HAS struggled lately, but it was ranked 3rd by WAR in the first half, and 23rd in the second half, for a season ending ranking of 9th. This easily passes the smell test to me.

Anyhow, if WAR is flawed as an indicator of bullpen effectiveness, then what would be a good stat to use? I don’t think that even PIG is naïve enough to suggest wins and losses. As useless as they are for starters, they are that much worse for relievers. Saves? For the most part they really only measure what your closer can do. How about ERA? Although somewhat flawed, it is the traditional stat that may have the most relevancy. How does the Boston bullpen rank in ERA? How about NINTH! Hmmm…. If WAR is useless what does that tell you about ERA?

No, WAR is not useless. In fact bullpen WAR has such a good correlation with bullpen ERA (because I am a nerdy geek with access to a supercomputer - or at least a 3 year old laptop and excel - I ran it and confirmed that bullpen WAR did have a very high correlation, much higher than ERA to wins or saves, see here:) that without digging deeper into the numbers, that alone should tell you that although it may not be perfect, it is still a reasonable surrogate for the effectiveness of a bullpen.

Posted by Baseball Ruben at 18:04 No comments: