As I have explained before, the probability that one team beats another in a single game can be approximated by adding 50% to the difference in their winning percentages. e.g, a .500 team is going to beat a .400 team 60% of the time, and lose to a .600 team 60% of the time. (Note: this obviously ignores home field advantage, pitching matchup, injuries, and so on. It’s a model meant to be useful at a macro level).  Playoff teams typically have very similar win-loss records. Sure, a 102 win team sounds much better than an 88 win team, but in terms of winning percentage, it’s like a 10-6 football team playing a 9-7 team. The 9-7 team might not be favored, but it wouldn’t be a shock if they won.

Let’s use some actual numbers with this year’s Red Sox: The hardest path to duck boats would involve beating the 100 win Yankees, 103 win Astros, and 97 win Brewers in the LDS, LCS, and World Series. The probability of beating the Yankees in a given game is about 55%. Extrapolating some math for a best 3 out of 5 shows that Boston will win 3 before New York does about 59% of the time. The numbers for Houston are 53 and 56%, and Milwaukee is 57 and 65%.  Therefore the probability of winning all these series is 59% x 56% x 65% = 22%. Even though we would be favored to win each individual series, there is less than 1 in 4 chance that we’d actually win all of them.
Luckily, we won’t necessarily have the toughest road ahead of us. Maybe Oakland will beat New York, or Cleveland will upset Houston.  And the Rockies end up winning the NL pennant. In that scenario, we would win all three series 29% of the time. Huh! A seemingly much easier route doesn’t make that much of a difference.

When you take into account for the probabilities of our potential opponents, and work out the math, the Red Sox have a 26% chance of winning it all. See full results for each team below 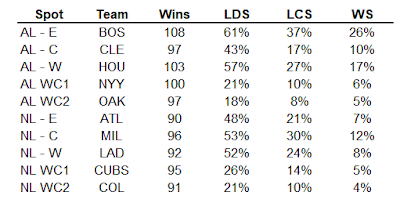 Now, these are higher odds that any other team, and if I was forced to bet my life savings on one team, the Red Sox would be it. But there’s still an almost 3/4 chance that they won’t win it all. So, if there is a November parade which does not include duck boats, don’t be too disappointed.