Why the Dodgers won't win the World Series (unless they do)

At playoff time last year, with the Cubs being favored to win the 2016 Fall Classic, I wrote a post explaining why you shouldn't bet all your money on them.  The logic is simple: There are 10 playoff teams, eight of which get past the wildcard game and into a League Division Series.  If all teams were equally matched, they would each have a 1 in 8 (or 12.5%) chance of winning the World Series.  But the teams are not completely equally matched.

Although there is a lot more parity than in football, the best teams typically have win percentages above .600 and the teams that sneak into the playoffs are usually between .525 and .550.  So by basic math (or common sense), the best teams have a better chance to win than the weaker ones.  But not THAT much more.  Last year the Cubs only had a 27% chance of breaking their curse.  The Rangers (yes, they were the top seeded American League team, re-iterating my parity point), had the next best odds at 14%.   (To see how these probabilities were calculated and the methodology, read the math section at the bottom of this post)

Anyhow, I've updated my spreadsheet, extrapolating the current standings to end of season to see how it would play out.  Unsurprisingly, the Dodgers have the best chance of winning it all.  But it's "only" 44%.  Let's see why you are better off not betting on them:

To win it all, they need to win the LCS, LDS and World Series.
They have a 77% chance of beating the Diamondbacks/Rockies wildcard game winner in the LDS.
Then if they face the Nationals in the LCS, they have a 72% chance of beating them. (If they get to face the not as strong Cubs, that probability goes up to 85%).  Multiplying these probabilities out and taking into account the odds of them playing the Cubs instead of the Nationals, ends up with a 59% chance of them getting into the World Series.  Once (and if they make it) there, the odds of winning it all range from 65% vs. the Astros to 88% vs. the improbable Twins.  Again, math..... total probability = 44%.
Now don't get me wrong.  Gun to your head and forced to bet on one team, this is the one you should put your life savings on.  But chances are you will lose that bet.  Even way more likely you will lose if you bet on one of the other teams.  (Betting on my team will see you kiss your money goodbye 91 times out of 100) 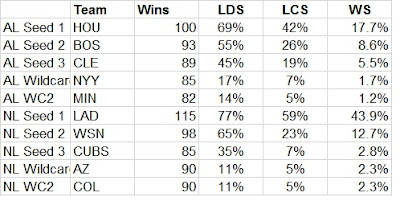 Also important to remember.... after I explained why the Cubs wouldn't win the World Series last year, I'm sure you all know who actually won, so anyone heeding my advice does so at their own risk.