Just finished playing the end of the regular season with my Red Sox OOTP team.  As you may remember in my last update, I had overcome same injuries and had the Sox in first place at mid-season, but with the Yankees very close behind.   The second half wasn't without its challenges.

With this game imitating real life, Pablo Sandoval was a problem at the hot corner.  He had a bad attitude, wouldn't accept a demotion, I was unable to trade him, so I acquired David Freese for 3rd base and released the Panda.

Ugh!  Luckily this team got hot right after the all-star break, got some breathing room in the division, and didn't have to make any rash moves. 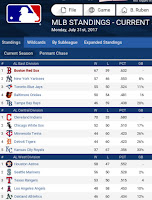 The Red Sox maintained at least a 5 game lead throughout the summer, and the year end standings were very similar to what they were in midseason.

The division winners all mimicked the MLB 2017 season, with the Indians and Dodgers having the best record in the league.

As far as individual performances, our own Craig Kimbrel had a great season, leading the league in saves, although he didn't perform quite as well as he did in real life.  Aaron Judge led the league in strikeouts, while belting 41 home runs.

Corey Kluber had a fantastic OOTP season, but just like Kimbrel's it wasn't quite as spectacular as what Indians fans witnessed in Ohio.   And of course, Mike Trout was as good as he always is.\
On to the playoffs!  The Red Sox face the Astros in the LDS, and the winner will take on the winner of the Indians / Wildcard Series.  Just like what is happening outside of the game.  Wish me luck navigating the Red Sox through the playoffs.... I'll post another update when I finish the season.

If this sounds like a game you'd like to play, you can get your own copy here