My previous OOTP update was at the end of the regular season, when the Red Sox had made the playoffs and would be facing the Houston Astros in the LDS.

[Editor's note: If you haven't been following my OOTP simulation all season, here are the links to quickly get caught up, the rest of you can skip past this italicized part

Preseason - hired "Baseball Ruben" to manage team, much to Boston media's chagrin
All-Star break update - Overcame multiple injuries to be in first place at the break
End of Regular Season - Staved off competition to end in first place, and ready for the playoffs.]

On the playoff off nights, I've been playing the OOTP playoffs and just finished. As you could tell from this post's title, I ended up with a much better result than the guys who play their home games at Fenway Park.

First of all, I easily advanced to the ALCS.  The first two games were close, but Game 3 was a 10-1 laugher.  Christian Vazquez only started 2 of the games but was named MVP.

Meanwhile had to wait a few days to see who would win the Indians/Yankees Series.

Just like a couple of week ago, that Series went the full 5 games.  But in this one, Cleveland was victorious setting up a repeat of the 2007 ALCS showdown with them.


The Red Sox lost the first game, but then won the next three, setting up a possible clinching Game 5 at Fenway Park. It went back and forth until the Red Sox tied it in the 7th on a Benintendi double. Game stayed knotted up at six until the bottom of the 9th, when Boston's first two batters reached. You could hear a buzz all around Fenway as Mookie Betts stepped to the plate with the pennant winning run on second base! And as he hit a hard shot down the 3rd base line, the crowd quickly erupted, but Carlos Santana silenced them just as quickly by stabbing it and going around the horn for a double play. This brought up Hanley Ramirez who was batting .167 in the postseason, and the reason I was under a lot of criticism by sticking with him. I could hear people in the twitterverse begging me to use a pinch hitter. Well, it didn't matter who was at the plate, because Andrew Miller uncorked a wild pitch as Xander Bogaerts crossed the plate on the way to the World Series!!! A pennant clinching wild pitch walk-off!
So, it was on to LA to face the Dodgers and their MLB best 105 wins (this game does mimic real life very well) in the World Series!

None of the first four games were close, with the teams alternating blowout wins as they headed into Game 5 tied at 2. The Red Sox trailed 4-2 in the 7th, when Hanley Ramirez hit a 3 run home run which ended up being the difference in that contest.  After an off day, the Series shifted back to LA, and Boston easily won Game 6 to take the championship. Coincidentally, it was 13 years to the date that they won it all for the first time in our lifetimes in 2004 (unless I have centenarians reading my blog). 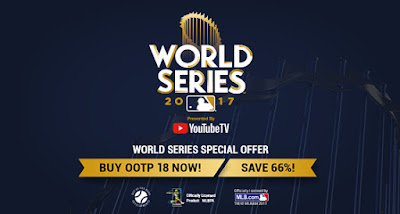 If this looks like a game that you might enjoy playing, you're in luck. Out of the Park Developments has a World Series special going on right now (until November 1st) where you can get the game at 2/3 off the regular price.  For just $13.60 you can enjoy countless hours of fun during the winter while you wait for spring training to start.

Also, for fun, take a look at this MLB Network clip above where OOTP simulated the post-season, and see what their results were.