Prior to the start of the season, I made some predictions on how each team would fare. I received some comments (mainly through my @baseballruben twitter), including a couple of compliments (one each from Houston and Tampa Bay fans – it’s easy to remember the accolades when there are so few), and lots of hate mail (a typical one was this Cubs fan who said “you SERIOUSLY don’t think they’ll win the pennant again?”).

Anyhow, now that the season is just about over time to see how those predictions played out.

There were some good ones: I correctly picked five of the division winners and had Houston winning the AL pennant. I had 7 teams that I picked their exact record within 1 game (Boston, Tampa, Baltimore, Kansas City, White Sox, Washington and Colorado). Speaking of the Rockies, I also said they would make the playoffs. While not predicting playoffs, I did say that the Diamondbacks would be much improved, and that the Twins would be one of the most improved teams in the league.

There were also some comically bad ones: I said not to count the Tigers out and had them winning the wildcard. They ended up in last place – by just one game – behind the Giants who I had winning the NL West. I had the Brewers dropping to 65 wins from the 73 they had in 2016, and they contended most of the season, ending up with 86 wins.
Overall, I was off by an average of 8 wins per team (in other words, if I picked a team to win 80 games they probably only won 72… or 88).  On the surface, that doesn’t sound great.  Well, what if someone had just picked every team to win the same number of games they had in 2016?  They would have been off by an average of 10 games!  Your record would be largely skewed by the aforementioned Tigers and Giants who won 22 and 24 fewer games, as well as the Diamondbacks and Twins who won 24 and 26 more compared to their previous season. This is why using some analysis is better than picking what happened in the past.  But, don’t overthink it too much! If you had predicted every team to end up with an identical 81-81 record, you would actually do better than predicting a repeat of the 2016 season – an average of 9 games off how they finished.  No one should be surprised by this. It is the “mean to regression” theory at work.

Ok, so my analysis beat blindly picking the same records as 2016, or picking everyone to end up at .500. Big deal. How about I compare my record to some other “experts”?   Well, I took a look at 538’s preseason predictions (scroll down and select Forecast from march 31 for their preseason picks).  And you know what? Ours were equally good (or bad). We both predicted the Indians to win their division with 94 wins and Houston theirs with 90. Good that we had the right division winner, bad that we were off by a combined 19 wins just between those two teams!

Here is the full spreadsheet showing my predictions against these other methods. (click to see larger version). Cells in green are good predictions, red ones are poor ones. You can see some patterns as all methods did poorly forecasting the Giants and Tigers fall, or Milwaukee’s rise. 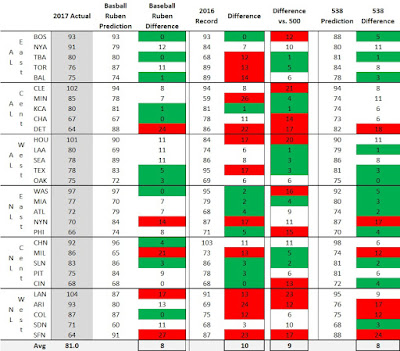 At least if the Astros beat the Dodgers, I’ll have correctly picked the World Series winner.

Maybe next year I’ll simulate the entire season on OOTP during Spring Training, and post my results here.