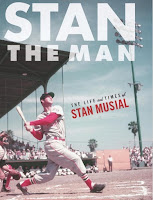 All week I have been selecting my AL award winners that will go in my ballot for the Baseball Blogger's Alliance year end awards.  They will announce their winners next week on their site.

I have saved the most anticipated and controversial award for last.  This is the Stan Musial Award for Player of the Year.   This ultimately comes down to two guys. Miguel Cabrera who won the Triple Crown and led the Tigers to the playoffs, and Mike Trout who had an unbelievably good season, for a rookie or otherwise.

Well, if  this was the MVP award, I might  give some extra consideration to Miguel Cabrera. After all, regardless of who you think was the best player, an easy argument could be made that without Miggy Detroit isn’t in the playoffs, and without Mike Trout the Angels would have probably likely finished 3rd in their division anyways.  Unfortunately this isn’t quite the MVP award, it is the “Best Player” award, so I need to dig down and really compare these two players.

As already mentioned, Miguel Cabrera won the triple crown.  Ok, so what does that really mean?  At most it would be an indication that he’s the best hitter - not necessarily the best overall player.   Also, looking at the rest of his career, it is easy to see that this was really only the 3rd best offensive season he’s had in the last 3 seasons.  Seriously. He hit more home runs, but his OBP was over 50 points lower that just last season mainly because his walks dropped off dramatically. Now, in his defense, he played 161 games and in every single one of them he had some guy named Prince batting behind him.  That will make pitchers think twice before pitching around him. However, whatever blame can be given to Fielder for Miggy’s lower walk rate, also needs to be credited to him for the few extra home runs he hit.  Digging further, if we look at WPA, we see that Miguel Cabrera was #2.  Not in the league… ON HIS OWN TEAM!

Of course, if we look at WAR, Mike Trout is heads and shoulders above him.  This includes not only his contributions from hitting, but from baserunning and defense as well.   Trout had a WAR of 10.7.  That’s the highest for an American League hitter in over 20 years. And he only got called up a month into the season.  To put this into historical perspective, he matched the best season of Ted Williams’ career.  Meanwhile, Miguel Cabrera’s 6.9 was nothing to sneeze at.  Other than Trout only Robinson Cano topped that this year.  But in total there have been 12 different players just in the American League who have had a higher WAR. Since 2010!  Saying Cabrera is the first player to win a triple crown in 45 years has the “Wow!”factor, but digging a little deeper, you see he really only had a good (ok, maybe very good, even  great) offensive season. 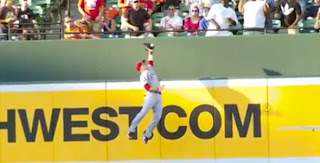 Trout’s season was truly historic.  As you've all guessed I’m voting for Trout. But now I’m going to anger even more Tiger fans by not even putting Cabrera 2nd on my ballot.  That honour goes to Cano.  He had an offensive WAR of 6.7 – almost as much as Cabrera’s total 6.9.  But his stellar defense at second base added another 1.9.  Cabrera had a negative defensive WAR.  What that means is that a “replacement level player” (e.g., a AAA call up) would be better defensively.  Having said all of this I won’t be surprised, or even terribly upset when Cabrera wins the MVP. As I said previously, he was more valuable to the Tigers than Trout was to the Angels.

These top 3 really weren’t that difficult.  The rest of the ballot is a tossup.  There were about 12-15 guys all deserving of a top 10 spot, and not much differentiated them.  In the end I had to make the tough decision to leave out some deserving candidates including David Price, Prince Fielder, Jered Weaver, Torri Hunter, and even our own Dustin Pedroia.