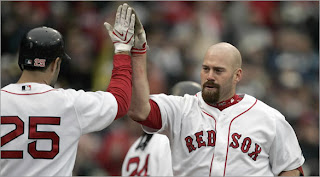 But knee inflammation issues for Mueller opened up an opportunity for Youkils to play in the show.  On May 15th, he got the call to come from Charlotte (where the Paw Sox were playing) to Toronto to play against the Blue Jays.  His parents also scrambled to try and get a cross-border flight from Cincinnati to watch their son's debut.

There weren't high expectations for the rookie batting eighth in this potent lineup, particularly facing former Cy Young winner Pat Hentgen.  And those lowly expectations were met when he popped up in his first at bat.

But in the 4th inning, Hentgen made a mistake on a changeup and Youkilis' first major league hit was a home run!  The rookie was justifiably excited as he ran around the bases.  He then sprinted into the dugout and as he's waiting to get the customary high fives, all his teammates are looking away from him at the field, as if no big thing happened.  They were hazing him by giving him the silent treatment!  A good sport, Youks went along with it and walked up and down the dugout giving imaginary high fives. A minute later, his teammates then embraced his accomplishment and all lavishly congratulated him, and everyone had a good laugh over it.

It was the  first time that a Red Sox player homered in their inaugural game since the immortal Sam Horn did it in 1987.

Later on, Pedro Martinez recovered the home run ball from the fans who caught it, and gave it to Youks, who presented it to his parents who made it to the game.

You didn't have to be a Red Sox fan or even a baseball fan to appreciate this moment. It was a special day for a young ballplayer and a son.

It was also the beginning of a Red Sox career that lasted over 8 years and included 2 World Series Championships.  .....and it happened in Canada.