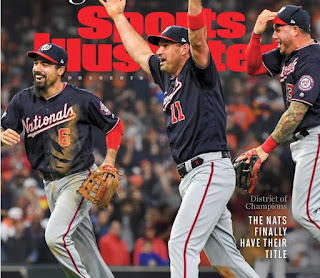 I pointed out at that time, that this wasn't THAT surprising, by using some simple math1   to show this should happen approximately once in every 100 MLB best of 7 series.  My twitter follower, Jere, did some digging for me, and found that there have been 108 MLB series that have gone six or more games.

After Game 7 there were some even more amazing sounding numbers spewed around:

This is the first time in 1,420 best-of-seven series across NHL, NBA and MLB that the road team has won every game.
— Alyson Footer (@alysonfooter) October 30, 2019

A few things to point out here:
1 - It isn't that rare. As my math below1 shows, the odds of winning six road games in a row in baseball are about 1 in 105. Winning 7 would be 1 in 229.
2 - Sure, there have been 1420 seven game series in the selected sports.... but the only way a road team can win every game is if it goes the full seven games. How many of these series went the full distance? No idea, the author doesn't bother mentioning that, instead repeating this meaningless number. If there had in fact been that many seven game series, it would be HIGHLY unlikely2  that in not a single one of them did the road team win all seven games.
3 - Something happening once in 229 times is indeed uncommon. But not "rare" (depending on one's definition). Every day people experience events that are equally uncommon. The odds of being dealt pocket aces in poker3  are almost exactly the same, and if someone playing poker gets this, they don't start announcing to the world what an improbable occurrence this was, and how the dealer must have some special card dealing skills.
4 - The key here is that if you repeat the same series of events numerous times, even the most seemingly uncommon sequences are likely to happen. If you flip a coin ten times and get heads each time you may be tempted to buy a lottery ticket, feeling it's your lucky day. But if you do this routine each morning when you get up, chances are that within two years4 , one morning you will flip ten heads in a row. Trust me, you haven't developed a unique skill or become luckier than the average bear when this happens. It's no more unlikely an outcome than any other combination of heads/tails showing up. It's just the human mind noticing patterns.

So, was Washington winning the World Series some kind of miracle, as no road team had ever won four games in a series?  No, them winning was much more likely due to Houston's stubborn insistence on bunting :)

Got a pitcher on the ropes, he's given up 3 straight hits, trying to find his groove... and you voluntarily hand him an easy out. Even if the sac bunt was successful, it would have been a poor choice.
— Ruben Lipszyc ⚾ 🇨🇦 (@BaseballRuben) October 31, 2019