A series of twitter posts by fans who were convinced that the acquisition of Aroldis Chapman by the Cubs would guarantee them a World Series victory inspired this post.

Fans typically grossly overestimate how much difference a player can make to a team. And there are a couple of reasons why.  First of all, just using a basic WAR analysis, you can see that adding a superstar to replace an average player mid-season won’t make a huge difference in the odds of making the playoffs. For example, if you replaced Brock Holt with Mike Trout, based on their current season’s play extrapolated to end of season would give the Red Sox maybe 3 more wins.


If this seems doubtful consider an extreme, but simple case: Red Sox are losing by a run in the World Series in an NL park in extra innings with 2 outs, bases loaded and the pitcher’s spot due up.  David Ortiz is on the bench. Should you pinch hit?  OF COURSE, everybody knows you should, and it would be an immediately fireable offense for the manager to let the pitcher bat for himself. Assume Ortiz has a 35% chance of getting a hit and winning the game, and the pitcher is batting .150 (for simplicity, assume any hit will be a single that scores 2 runs, ignore walks and errors).  How much has pinch hitting increased your chance of winning?  Well, 65% of the time, Ortiz is going to make an out just like the pitcher would.  Also, 15% of the time the pitcher would get the winning hit just like Ortiz would.  It’s only the other 20% of the time that Ortiz will win the game where the pitcher batting wouldn’t.  Even in this extreme case, 80% of the time it doesn't matter that you have a better hitter at bat.

But the other thing that fans and analysts often overestimate are the odds of a better team to beat an inferior team in a playoff series.  For example, a great 100 win team will beat a "barely made the playoffs" 90 win team only about 56% of the time in a single game1.  Using some basic math, this works out to them winning 61% of 3 of 5 Series and 63% of the time in a 7 game Series2.

If a team needs to win the LDS, LCS and WS, multiplying out the probabilities works out to under 25% probability that this team will win it all.  And that is assuming they get to play “weak” 90 win teams in all the Series.


I have a spreadsheet which does all the math, based on current teams’ records extrapolated with no changes to end of season. These are the current odds: 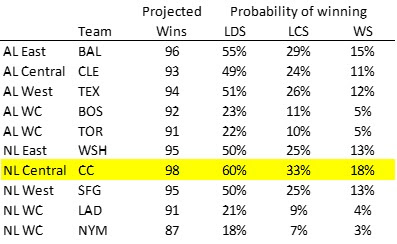 Looking at the Cubs (highlighted), this shows they currently have a 60% chance of beating the Wildcard play-in game winner to win the LDS, and then (based on a 54% chance of beating either the Nationals or Giants), less than a 1 in 3 chance of winning the pennant. Then depending on who they would play in the World Series, they have anywhere from a 52% to 59% chance of winning that Series which multiplied out (and taking into account the probability of who they would play from the AL) leads to the 18% of breaking their curse.
Note that if all the playoff teams had the exact same record, the probability of a division winner winning the World Series would be 12.5% (1 in 8 as they’d have to win 3 series with a 50% probability each), and it would be 6.25% for the wildcard teams. You can see the actual odds aren’t THAT different from that.  Sure, the Cubs with the best record in the league have the best chance, but it’s at 18%.... which means there is an over 80% probability that they will not win the World Series.
(PLEASE NOTE: All these probabilities are strictly looking at the teams’ won/loss records. There is no accounting for strength of schedule, injuries, etc. and there is no actual baseball analysis involved. Just pure math)
Anyhow, let’s see how adding players at the deadline can help.  Let’s say that the Cubs make a trade that gives them 5 extra wins in less than half a season.  (This would be unprecedented by the way – it would take the equivalent of adding vintage Barry Bonds to replace a below replacement level player in your lineup).  Again, using current win projections, that would vault the North Siders to 103 wins.  Going through all the math…. They end up with a 24.7% chance of winning it all.  This is much better odds than any other team, but still more than a 3 in 4 chance Cubs fans will spend the offseason saying “Wait Till Next Year!”.

Now, how about our Red Sox? Using the same spreadsheet with the current projection of 92 wins, they should win the World Series 5% of the time. What if they did make a trade to improve to 95 wins? Running the math shows that will improve their chances to 7%.  Now what if they stand pat, but Baltimore slumps, and Boston wins the division with the same 92 wins?  Now, the odds of winning go up to 11%.  (This is mainly because we’ve eliminated the ~50% chance of losing the wildcard game).  If we improve to 95 wins AND win the division, now we’re all the way up to 15%. This is a best case scenario. Do you want to trade Moncada, Benintendi and who knows who else for a 15% probability of winning this year?  Me neither.

(Below the line shows some information on how the numbers in the spreadsheet were derived)
Warning: Math below!