Pe-dro, Pe-dro, Pe-dro the fans cheered while proudly waiving the Dominican flags. What an amazing event to witness in person as Pedro Martinez was inducted to the Baseball Hall of Fame in Cooperstown this past Sunday.

As great a pitcher as he was, he is every bit as good as a speaker, having the crowd of an estimated 50,000 eating out of his hand.  It started early in the day  as every half hour or so the day's activities were announced on the PA, and each time Pedro's name was mentioned the crowd would spontaneously erupt.  Cheering, shouting his name and/or waving the flags. It was obvious that with all due respect to Craig Biggio, Randy Johnson and John Smoltz, the majority of the attendees were here for Pedro.


And then he started his speech with a simple "¡Hola!" which again made the crowd go wild.

I'm not going to repeat his speech, if you want to see it check out on MLB.  Among the highlights were him saying “Boston, I don’t have enough words to say how much I love you", which endeared him even more to Red Sox fans, and in a more serious moment him recounting how he skipped a start late one season to give an opportunity for rookie pitcher Josh Hancock to get a start.  Got a little dusty after that one.

After the ceremony, I visited the musem and saw Pedro's corner there: 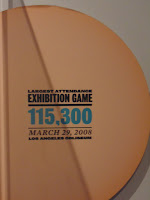 Another thing I saw in the Hall of Fame museum, was that there was a plaque (left) commemorating something that I did.  If I don't go to that game with my son, that plaque only shows 115,298 as the largest attendance ever at a game.

After watching the reception and visiting the museum, started heading towards Boston to watch #45 be retired on Tuesday.  Since we arrived on Monday, went to that evening's game.

Bought last minute tickets on the street, and as luck would have it they were in the infamous Section 36.  Pretty good view of the whole field from there:

The one noteworthy thing about this game is that it was the last time #45 was not going to be among the retired numbers on the wall. The game started with Joe Kelly giving up a triple, triple, double, hit by pitch, single and reach on error. It was 3-0 before an out had been recorded. A microcosm of the season right there. In spite of that start, Boston ended up getting the winning run to the plate in the bottom of the 9th, but fell on the short side of a 10-8 final.


And the next day was the Pedro jersey number retirement. What a great event that was. Anticipation was building in the park, with the #45 in the grass, the right field wall had a number covered, and the scoreboard reminding everyone that this was Pedro's day:
Arrived at Fenway about three hours before the scheduled start time, to make sure we could be among the first to get in when the Monster seats for BP opened two and half hours before game time for Red Sox Nation card carrying members.  We walked up to the Monster and watched some hitters. Rusney Castillo hit a ball that went well over everything and hit the parking lot across the street. I then moved back hoping to maybe catch a ball off the back wall (picture on left).  Hanley Ramirez came up and hit a ball that might have been the hardest hit ball I've ever seen in person. I don't think he had yet finished his swing by the time the ball was past me, hit the back wall and rebounded all the way back onto the playing field. If I had been standing two feet to the right, I don't know whether I'd have caught that ball, or if (more likely) there would have been a baseball sized hole in the middle of my chest. I've played a little baseball and know what line drives right at you are like, but this was a whole different order of magnitude faster and harder. Witnessing that was well worth the price of admission.  Eventually they opened the rest of the gates and kicked the non monster ticket holders out of there and we made our way to our seats.


The jersey number retirement ceremony started with a video montage which highlighted Pedro's career. Showed his stats, with the loudest cheers coming when "1 World Series Ring" was displayed and then some career highlights including his 17k one hitter at Yankee Stadium, striking out five in the 1999 All-Star Game, and of course him winning Game 3 of the 2004 World Series.  Then Nomar Garciaparra delivered a video tribute to Pedro. Afterwards a parade of Red Sox players came out to individually congratulate Pedro. Tim Wakefield was the first, followed by Lou Merloni and Jim Corsi. Then a trio of 2004 teammates, Curt Schilling, Trot Nixon and Orlando Cabrera were introduced. Following that were some all time Red Sox greats, Luis Tiant, Dwight Evans and Tommy Harper.  Afterwards were 4 Red Sox Hall of Famers: Dennis Eckersley, Jim Rice, Carlton Fisk and Yaz.
Finally, the only current Red Sox who was a teammate of Pedro, David Ortiz came out. He started with an "¡Hola!" as a shoutout to Pedro's Cooperstown speech and gave the signal to unveil the retired number: 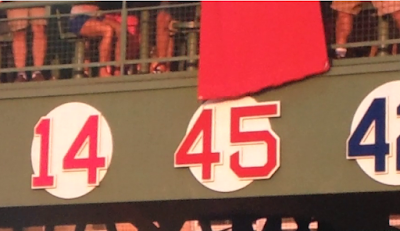 After the number was unveiled, Jason Varitek was called out to the field by Pedro, and he proceeded to catch the ceremonial first pitch. Throughout this whole ceremony which lasted a little over 30 minutes, the crowd occasionally starting random "Pe-dro, Pe-dro" chants. And of course David Ortiz couldn't leave the field without the opportunity to get another selfie to add to his collection:
Finally, the game (which was an afterthought to most in attendance) started. In spite of Joe Kelly's poor start the previous night, Wade Miley made him look like Cy Young, as he gave up 5 runs in the 1st inning, and before it was over, the crowd was chanting "We want Pedro". I have little doubt if he laced up his cleats he'd be the #2 starter on this team right now.  And Boston put up a fight, down 9-2 entering the 9th, they scored once and had the bases loaded with nobody out, but fell short again 9-4. Despite the Red Sox losing both of their games, it was a great 3 days of baseball related activities.  I had forgotten how much I missed Pedro.

If you're as big of a Pedro fan as I am, you need to read his book:

Get it from Amazon

Canadians get it from Amazon.ca