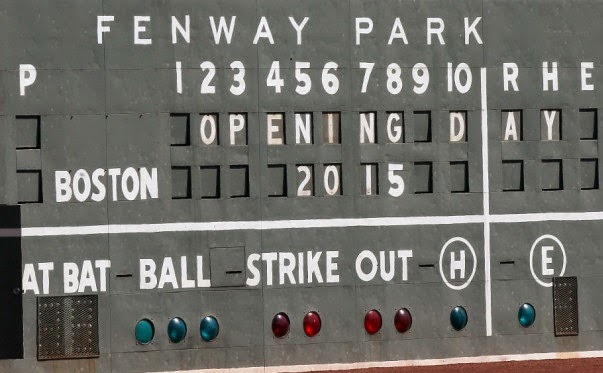 A good excuse for another day off work. Last year's was absolutely amazing.  No banner going up or rings to hand out this year. But expectations for this season are pretty high.

The matchup looks pretty good, with the Nationals Jordan Zimmerman facing our own Rick Porcello. The starters for the home openers are all over the place. Unlike Opening Day where usually you get both team's #1 facing each other, the home opener is a bit of a wildcard. Sometimes they are scheduled after a 3 game series, so the teams' #4 starters oppose each other. If it's the 3rd series of the year, then it's game 7 so it's #2 starters facing off. And rainouts, injuries, extra inning games etc can impact all of that so it's really unpredictable.  Having said that here is who threw at Fenway for the home team over the past 10 seasons and the outcome of the game:

Some interesting notes:
- We had won nine home openers in a row until last season.
- Seven of those nine series were against division rivals
- This will be the second year in a row where we host an NL team
- Beckett pitched the home opener five times in seven seasons. During this period he was anywhere from an ace to our #3 starter, but the home opener always seemed to lineup with his turn in the rotation.

Anyhow, after tonight's shellacking at Yankee Stadium, I'm ready for this game to get underway and see how some of the Red Sox new acquisitions fare at Fenway Park.
Posted by Baseball Ruben at 23:22