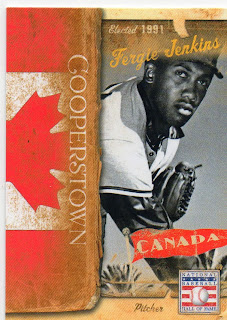 In my last post, I previewed all the former Red Sox on this year’s ballot.  Today I take a look at the Canadians and other players of interest to Canada:
CANADIAN PLAYERS

Eric Gagne – As already discussed in the Red Sox post, no. Just no.  NO

Larry Walker – Starting his career in Montreal, he is a favorite of many Canadians.  He ended his career with a .313 batting average, an even .400 OBP and 383 home runs, for an OPS+ of 141. A lot of people discredit him for his offensive output in Colorado, but keep in mind that the “+” in OPS+ is adjusted for ballpark effects.  And besides, in his MVP 1997 season where he hit .366 with 49 home runs, he only hit 20 out of Coors Field. Some park effect(!).
And he was also an excellent outfielder, winning several gold gloves.  He has a career WAR above 70.  There are exactly 10 players with a higher WAR who are not in the Hall and nine of those are either not eligible or still on the ballot (Bonds, Bagwell, Frank Thomas, ARod, Pujols  Chipper Jones, Thome, Griffey and Rose).  Bill Dahlen is the only player who ever achieved Walker’s career WAR and isn’t in. YES

Moises Alou – Before being remembered for the Steve Bartman incident, he was a promising young Expos player.  He was a runner up to winning Rookie of the Year when he first broke in, and was 3rd in MVP voting the year the Expos had the best record in the league but missed the playoffs (1994, strike).  He was a 6 time all star, and ended his career with a .300 batting average and 332 home runs.  He was a pretty good player for a long time, but falls short of Hall worthiness, although he may stick around the ballot for a few years. NO

Jeff Kent – He started his Rookie season playing home games at the Skydome, hitting 8 home runs for the Blue Jays.  But before the campaign was over, he was sent to the Mets for David Cone. Cone won 4 games for Toronto before leaving as a free agent.  Meanwhile, Kent hit 369 more home runs in his career, which was more than any second baseman since, well, ever.  However, having more home runs than any other second baseman isn’t exactly an indisputable reason for inducting someone into the Hall.  It’s like putting in a catcher because he has more stolen bases than any other catcher. That’s not what they’re supposed to be good at. Kent never struck me as one of the better players of his era. His power was overshadowed by a ton of players, and he only really stood out because he played second base. If he was an outfielder or a DH we wouldn’t be talking about him, and he didn’t play second base well enough to help his case. NO

Edgar Martinez – Growing up in Puerto Rico, Martinez was actually born in New York City. And he spent his entire 18 year career in Seattle, which although only about 100 miles from the 49th parallel, is not quite in Canada.  So why did I include him on the list? Well, he spent part of 4 seasons as the third baseman for Seattle’s AAA affiliate, the Calgary Cannons.  And it’s my blog, I include who I want(!).  Like Curt Schilling, while watching him play, I thought he was a pretty good player, but Hall of Famer didn’t automatically come to mind, like it did with several of his teammates. But then I looked at the numbers.  He ended his career with a 312/418/515 slash line, good for an OPS+ of 147 and accumulated 68.3 WAR. What is WAR good for?  Apparently it helps me decide who should be in the Hall of Fame.  I don’t really need to go any further. You read what I said above about Larry Walker and his 70 WAR.  The biggest knock against Edgar is that he was a DH.  You know what?  A DH’s job is to HIT!  There are a ton of good hitters in the Hall who were absolute butchers in the field.  Would Edgar have been more valuable to the Ms if he had played an atrocious third base instead?  Because I guarantee if he had, he’d have more than 35% of the votes that he received last year.  Does that make sense? Neither does leaving him off the ballot. YES

Fred McGriff  - 493 home runs. And he wasn’t a Dave Kingman-esque type of hitter, finishing his career at 283/377/509, rather than the .236 and barely getting on base at a .300 clip that Kingman had. He got a bit of MVP consideration throughout his career, and some all-star games, but it’s hard to get the mainstream media to notice you when you spend most of your time in places such as Toronto, Tampa and San Diego. If he had played home games at Yankee stadium he’d certainly have more than 20% support for the Hall. YES

Jack Morris – Just no, no, no. On the list as he was a member of the Blue Jays, and he won rings with them despite a 6+ERA in 1993. I’ve ranted against him before. Feel free to read it here, I don’t feel like repeating myself. But I will one more time: NO

Tim Raines – I don’t even know where to start. Many others have said much more than I could. Start by checking raines30.com. Everything I wanted to say has already been covered there. This highly acclaimed list has Raines as the best player not in the Hall of Fame. (side note: you can vote at this year’s version here)  If you thought playing in Toronto, Tampa or San Diego was bad for media exposure, someone in Montreal might as well have been in Siberia as far as the media was concerned. YES

Frank Thomas – The Big Hurt came to Toronto as a 39 year old past-his-prime DH and all he did was slug 26 home runs and get on base at a .377 rate.  He finished his career well above a 300/400/500 slash line. He had very good power even for a 1B/DH, getting over 40 home runs 5 times in his career, but more impressive was his ability to get on base, walking over 100 times in 10 seasons.  His career .419 on base percentage is much higher than those of several Hall of Famers who were known for their ability to get on base such as Wade Boggs or Rickey Henderson.  YES

These are the players with a Canadian connection in this year’s ballot.  I have selected five of these to put a checkmark next to, as well as three former Red Sox.  In my next post I will publicize my full ballot.   It will be tough to limit it to just 10 players