The Best got Better! 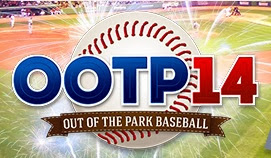 Obviously I must be talking about our Red Sox.  The best team in the league last year got better and they’re among the favorites to go deep in the playoffs.  What’s that you say? They weren’t the best team last year – they only won 69 games?  How’s that possible?  On paper they surely were preseason picks to get a shot at a ring.  Oh yeah, Bobby V got involved.....

No, I’m taking about the latest version of OOTP.  Unlike the Red Sox, last year’s version was also very good.  But somehow, almost unbelievably, it’s even better this year.   I love the depth of this game and all the different ways you can play it as I’ve mentioned in previous reviews. This year’s version has a lot of subtle improvements.  There is a new player origin system - not only a customizable draft but also international free agents, both amateurs and established players, and ability to scout internationally and in the indy leagues for that diamond in the rough.  In fact the entire scouting engine has been improved.  Also the trading AI is much better. In the past I used to be able to "cheat" by making trades that maybe only Ruben Amaro Jr. would realistically accept.

Anyhow, I just recently started a game to try and see if I could do as well at managing the Sox as John Farrell has.
I started off slowly, but then pulled off a 12 game winning streak in May 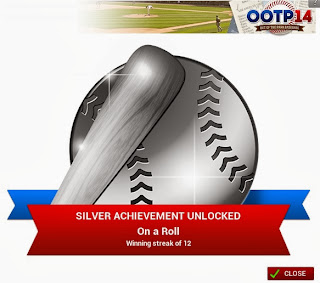 that gave me some hope.  I was flirting with .500 most of the season, and heading into September I was 5 games behind the Royals for the 2nd wildcard.  I had been in  3rd or 4th place in the AL East all season and didn’t really notice how many games behind I was in the division.  As I was simulating the season, only stopping to adjust my lineups and calling up AAA reinforcements as needed, I just kept my eye on the wildcard race.  And as September went on I got as close to 3 games but couldn’t catch up.  On the last weekend the Red Sox no longer showed on the wildcard leader board (my view just showed the top 3 teams)  and I was resigned to get ready for the offseason (which in this game can be just as much or more fun!)  But then something unexpected happened: I WON THE AL EAST! Without even realizing it, I won the last 7 games of the season to finish with 87 wins.  Ahead of New York (86), Tampa (85) and Baltimore (83).  The Royals and Cleveland took the wildcards.  Tigers and Oakland were the other division champions.  I was somewhat impressed as to how close that was to what actually happened this season in the American League.  In the NL it was a different story.  The division winners were Atlanta, Milwaukee and San Francisco.  The Mets and Cincinnati won the wildcards.  So I started playing the postseason.  The LDS was tight, going to a 5th game which I played pitch by pitch.  Verlander against Doubront. Down by a run, I tied it in the 8th but pretty much emptied my bench with pinch running and hitting.  Finally in the 14th inning I got a run across against Phil Coke and had to decide whether to let Koji pitch his 3rd inning of relief, or finally bring in my closer (Hanrahan)  (In May  Andrew Bailey was sidelined for 10 months – some more realism from this game).  In real life I might not trust anyone other than Koji, but he was tiring and I did have my closer available so in came Hanrahan.  It was a nail biter.  He allowed runners to get to 2nd and 3rd with 1 out.  I had a decision to make – infield in or out?  I had nobody left in the bullpen, so I didn’t really want to give up the tying run, but with the infield in a routine ground ball could get through and end the season for me.  My heart was racing as I made the decision.  Everyone in!  I let out a sigh of relief as Alex Avila fouled out for the 2nd out.  I could now put my defense back to normal and just try and get an out.  Jhonny Peralta stepped up and hit a deep fly ball, but Victorino tracked it down as we advanced to the ALCS.   That was pretty anticlimactic as I swept Cleveland in 4 straight.  Then on to the Fall Classic where I easily disposed of the surprising Brewers in 5 games to win the World Series:

One of the things I love about this game is how it really shows that baseball is a game of inches. A well placed hit and I’m eliminated in the ALDS, but a foul pop up and I go on to become World Champions. Just like in real life - if Pedro Martinez doesn't pitch to Posada maybe we break the curse in 2003; if Dave Roberts doesn't get a good jump, we're still waiting for 2004 to happen.

Let’s now hope John Farrell has the same success in the postseason as I did with this realistic simulation.

If your favorite team doesn't win it all this season, you can buy this game and have all off-season to simulate what might have been if you had been at the helm.
Posted by Baseball Ruben at 13:42