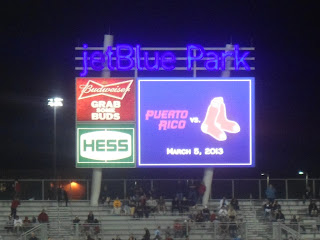 4:15 AM - depart home to go to Calgary airport.  For those of you that know me, you know how major of a commitment it is for me to get out of bed before 8 AM.  Very few things get me up before dawn. Baseball is on that shortlist. (Very short. It has exactly one item on it).
7:00 AM - Flight departs towards DFW (Dallas) where I'll catch a connection to RSW (Fort Myers)
6:00 PM - We arrive at RSW, after a pair of uneventful flights.
7:00 PM - after getting luggage and rental car check in at the hotel.

I check my phone, and see on my twitter feed that the Red Sox have an exhibition game against Puerto Rico's WBC team starting in 5 minutes.  Fenway South is about a 5 minute drive away.  Is the game sold out, will I be able to buy tix from a scalper?  I'm tired and hungry, but only one way to find out.

We head towards the game, and quickly buy a pair and make our way to our seats.  I'm going to be in Fort Myers less than 48 hours in total, but will get to watch the Red Sox play three times.  As Macklemore would say "This is ***ing Awesome!"

The game was not sold out, but it was a pretty lively crowd. The Puerto Ricans were cheering loudly and proudly displaying their nation's flag every opportunity they could.

John Lackey pitched and shockingly he wasn't absolutely awful. In fact, he looked quite good.  I'm going by memory as I didn't keep score but he went 3 scoreless innings, had at least a pair of Ks, and never got in any trouble.

Early in the game, Will Middlebrooks gave the Red Sox fans a reason to cheer when he hit a no-doubter  home run over everything in left field onto Landsdowne Street. (or whatever street is behind the monster at this Fenway Park replica).  By the way, this stadium is very nice. I've been to many minor league and spring training parks and this is certainly among the nicest.

In the 4th, the Puerto Rican bats came alive and they scored 3 runs. The highlight was former Red Sox Mike Aviles getting thrown out at the plate trying to score from first on a wall ball that was bare handed by Mike Carp in left field, who hit his cutoff Drew perfectly, who relayed to Lavarnway who had the plate blocked and put down a perfect tag.

Speaking of Ryan Lavarnway, he had quite a game.  He gunned out runners at both second and third base, and had 3 hits, including 2 doubles.  However, he will never be mistaken for Ellsbury on the bases. Both doubles were close plays, but were hit deep enough that they should have been standup hits. Unfortunately, no matter how well he plays, I think he has to start the season in Pawtucket so we can stash him there as depth.  Unless we can find a taker for Salty who will bring give us more then a fungible reliever in return.

Mike Napoli also brought some ooohs and aahs from the crowd when he hit an absolutely towering home run.  It might not have gone as far as Middlebrooks' but it was much much higher.

In between innings on the scoreboard they showed some Jim Rice highlights.  That's never a bad thing.

After most of the starters had left the game, the Puerto Ricans had a chance to add some more runs, but Pedro Ciriaco turned a beautiful double play with runners on the corners.  This game really had a bit of everything.

In the end Andrew Bailey came in to close out a 4-3 lead. Had 2 outs and 2 strikes on a batter... and lost him.  Made the ending interesting as they ended up with runners on 1st and 2nd, but he ended up with the save.

The Puerto Rican team had many recognizable MLB stars including Yadier Molina and Carlos Beltran. At the end of the game they seemed happy to interact with the fans.  All in all a very fun game to watch, particularly when it was unexpected.  If I have time, I'll post a recap of tomorrow's game.