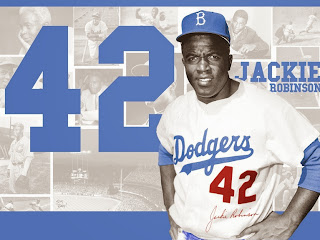 After naming Boston manager John Farrell the winner of the Baseball Bloggers Alliance (BBA) Connie Mack Award, today I cast my ballot for the BBA's Willie Mays Award.   This is really the Jackie Robinson Award for Rookie of the Year.

Last year Mike Trout lapped the competition and was an unanimous winner receiving all the first place votes by BBA members. This year's rookie crop in the AL isn't quite as deep as last year's.  Nobody is breaking any Jackie Robinson like barriers, there are no Fred Lynn MVP type seasons, or players that captivated a nation like The Bird or Fernandomania in the past.  But there were several good players worthy of mention:

Jose Iglesias started off red hot, hitting over .400 in April.  Everyone knew he had a Hall of Fame glove, so any hitting he did was a bonus.  By the time he got shipped to Detroit he had cooled off a bit, but was still hitting .330, and he finished the season at .303.  A lot of that was BABIP fueled and obviously trended in the wrong direction, so I don't think anyone expects him to maintain a .300 BA going forward.  Still, his gold glove defense, combined with league average offense made him a very valuable player this year.

Tampa had some rookies help them get to the playoffs.  Chris Archer got called up at the beginning of June and was a solid addition to the rotation, ending up with 9 wins and throwing a couple of shutouts including a 2 hit 1-0 win at Yankee Stadium.  But the most anticipated debut was another Ray, outfielder Wil Myers. After trading James Shields away for him, Tampa finally called him up on June 18th. He started off slowly, going 1-7 that day in a doubleheader at Fenway. But he quickly warmed up, and ended up hitting 13 home runs with an OPS of .831. Meanwhile, David Lough who played where Myers would have if he stayed in Kansas City had a pretty good season himself, tying Myers in fWAR with 2.4, although his was more skewed towards his defense.

Unlike last season where Oakland rookies Cespedes, Carter and Donaldson all helped the lineup, this year they had several new additions on the mound. Dan Straily was the most notable, going 10-8 in the rotation, Sean Doolittle was a vital member of the bullpen, and Sonny Gray who only joined the rotation in mid-August but ended up with 5 big victories down the stretch was also a key contributor leading them to a division title.

Other notable rookies include Seattle's Danny Farquhar who was only promoted to closer in August and ended up with 16 saves,  Texas starter Martin Perez and outfielders JB Shuck of the Angels and Oswaldo Arcia of the Twins.

Again, I am voting for who had the best rookie season, not who I think will end up with the best career. In my mind, Farquhar and Gray are the pitchers with the most promise, but they got called up too late to accumulate enough value.  Based on their 2013 performance, here is my ballot: