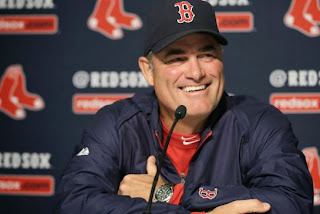 As a member of the Baseball Bloggers Alliance, I have the privilege of casting a ballot for all the end-of-season awards.  I did the National League ones earlier, and now I'll be doing American League one at a time.  I'll be going in order from the easiest to the toughest. The first one I am announcing this year is the Connie Mack award for Manager of the Year.  (No, it's not named for the Republican Senator from Florida, but this guy).

I had a feeling I knew who the winner would be before the season started.  In my preseason predictions I had some teams that I thought would win quite a few more games than last season, including Kansas City, Minnesota and Boston.  But I only saw one of these teams making the playoffs.  And yes, I may have a slight bias, but that hasn't stopped me from picking Joe Girardi for this same award in 2011 or even Yankee David Robertson over Papelbon for the reliever award in 2011.

So as you may have already guessed, Boston's John Farrell is the name I put on the ballot.  I don't think he's a genius or flawless.  I honestly don't believe a good manager can help a team win more games than it could without him. The Red Sox win total improved from 69 to 97 but that may just be because that was their true talent level.  As we saw last year, a bad manager can certainly sink a team.  A good manager can merely minimize the damage.

Other candidates:
- Tito Francona, who led the Indians into the playoffs getting them to win 24 more games than in 2012
- Kansas City's Ned Yost  who kept the Royals in the chase until the final weekend of the season, improving the team from 72 wins to 86
- Yankee Joe Girardi who somehow kept his bunch of misfits within striking distance most of the season, while everyone laughed at the cards he had been dealt
- Last year's winner, Bob Melvin who again led Oakland to a division title

And, despite my early season predictions, Ron Gardenhire's name never crossed my mind as I was compiling this list.

After considering the talent these skippers had to work with, and what they accomplished, below is my full ballot:

And of course, an honorable mention to Bobby V, for being so craptastic that the Red Sox only had to suffer one season with him, allowing us to upgrade more quickly.