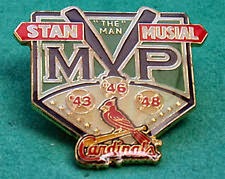 My final award in the Baseball Bloggers Alliance year end voting, is the Stan Musial Award for the player of the year. Last year in a slightly controversial vote I ignored Miguel Cabrera's triple crown, and cast my ballot for Mike Trout instead.  Well, this year, with a lot less media hype Cabrera had an even better season!  His batting average went up from .330 to .348. He hit the same number of home runs and only 2 less RBI in 67 fewer at-bats.  His walk ratio increased from below 10 to 14%.  He led the league in batting average, on-base percentage and slugging, to obviously lead in OPS / OPS+ as well. He led in OPS last season as well with .999, but this year he was at 1.078, the highest mark in the American League since 2006. Maybe I can make it up to Tigers fans by voting for him this year, when he'll need more of a push as he didn't get the glitzy (but meaningless) triple crown.
But I won't.  Mike Trout, who depending on which metrics you value, may have had an inferior season to his rookie year, still easily outperformed Mr. Cabrera.  His sexy home run and steal counting stats were down, but his walk rate improved almost 50%, leading to a higher OPS.  His bWAR of 9.2 easily bested Miggy's 7.2.  (He had an even bigger margin in fWAR 10.4 to 7.6, if you prefer the Fangraphs version to Baseball-Reference).  Without even considering defense, Trout edged Miggy in both versions of offensive only WAR. When you consider their gloves, defensive range and speed, it's a no-brainer.  Mike Trout was the American League's top player this year.

Last year I didn't even give Cabrera a 2nd place vote.  What about this season? Chris Davis and Josh Donaldson have pretty good cases.

But not good enough.  Miggy at least gets a 2nd place from me.