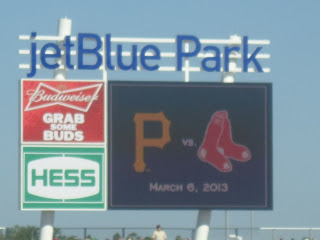 ... followed by awkward silence. Yes, the announcer at JetBlue Park also had no idea who the gentleman wearing a Red Sox #93 jersey was. This is one of many things you see in a spring training game that you don't see in meaningful games. To be fair to Kevin Millar's brother, Jensen, who served as the public address announcer this afternoon, I also had no idea who #93 is.  And I may not have a cool brother who was a key part of the first Red Sox Championship since World War I, but I'm fairly confident in my ability to name most Red Sox by sight.  And I don't just mean the starting 9 or just the ones on the 40 men roster, but most players in the high minors and key prospects at lower levels.

Still... when a player enters the game and is going to officially appear in a boxscore, you would think someone in the pressbox would have a cheat sheet with a list of names and numbers. This was only one of many moments that gave fans a chuckle at today's game.  Anyhow, I have confirmed that this was Portland centerfielder Shannon Wilkerson.

Other light moments from the game:


After a leadoff strikeout, Brock Holt took the catcher's throw, fired to Iglesias, who threw to Ciriaco who looked at third base for a while.  As the ump was trying to get Holt's attention that someone was waiting to throw him the ball, Ciriaco gave up and threw the ball back to the mound.

Lyle Overbay replaced Jonny Gomes in leftfield. I guess if you're fighting for the 25th spot, a 1st baseman / 5th outfielder has more value then just a 1st baseman. Well, I think he showed us there's a reason why he hasn't played in the outfield since AA El Paso which was before 9/11.  With a runner on 2nd, he came in to field a routine liner and either hold the runner at 3rd, or easily gun him out at home.... and the ball scooted under his glove while the runner trotted home unchallenged.  The next inning he hit into a double play.  I hope for his sake, he gets released soon, so that another team can consider him for a spot, because I sure don't think there's room for him in the Boston organization.

Pedro Ciriaco moved from second base to centefield in the middle of the game, and also showed us why he should never see the outfield.


Leading off the 8th, Jose Tabata hit a high chopper over the mound.  Rubby De La Rosa jumped high and made a leaping grab on a ball that was well on its way to centerfield. Boston was down 8-2 at the time and the fans hadn't had a lot get excited about, so most of the stadium started cheering wildly when he came down with the ball.....  And then he promptly threw the ball into right field, and Tabata ended up on 3rd base.


Other game observations:
Jon Lester started the game by giving up a leadoff triple to Sterling Marte who scored shortly thereafter, the first run he's given up all spring.  But he pitched well, despite not having his best stuff, ending up walking three batters, but he didn't give up another run during his four innings of work.

Jackie Bradley Jr looked great. Again. He showed patience at the plate getting two walks, and exhibited his usual stellar defence and speed. He also threw a rocket in from deep centerfield.  Who was the last centerfielder we had who could do that? Certainly wasn't Ellsbury, Crisp or Damon who all have sub-par arms.

Speaking of defense, Holt, Ciriaco and Iglesias all flashed their leather today.  Holt robbed McCutchen of a hit in the first inning, making a diving play at 3rd base. In the 2nd, Ciriaco threw out Garret Jones from short right field.  Later in the game Iglesias went DEEP in the hole, ending up halfway in leftfield to start an almost double play.

Jonny Gomes CAN hit lefties. He lined out in the first inning, and when he came up again in the 3rd with 2 outs and runners on 1st and 2nd, I predicted he'd give us the lead with a line drive double.  I was close. He did hit a line drive double, cashing in Ciriaco from 2nd, but Holt who was on 1st was held up at 3rd by Coach Brian Butterfield. He ended up stranded. I suspect in the regular season he would have been waived in, but it would have been a close play, and no point risking an injury in a meaningless spring training game.

Saltalamacchia almost homered, doubling off the top of the monster. I like him, but am still hoping someone calls Ben about him in the next month, so Lavarnway can start the season at Fenway.

I was really looking forward to watching Steven Wright pitch.  After seeing him live, I think he'd be well advised to sticking to his comedy routine (sorry, I'm sure everybody else has already made that joke). He had trouble controlling his knuckleball, and when he wasn't walking batters, they were teeing off on the pitches he left up in the zone.  He ended up giving up 5 runs in his 2 innings of work.

Rubby De La Rosa went right after hitters, striking out a pair in his 2 innings of work, but also leaving some balls over the plate.  It was enjoyable seeing him flat out beat some batters, and I'm also looking forward to him getting called up.

And, in the it's a small world category, before the game I saw Andrew McCutchen being interviewed next to the Sox dugout.  I took a closer look and 3000 miles from home I realized that the interviewer was a Canadian reporter who grew up 50 miles from me and also writes for the Canadian Baseball Network.

All in all, a good day. Even took some time to take touristy pictures:

Tomorrow it's over to the Twins field to watch the Red Sox as the visiting team.