From March 8th to 12th, the Calgary PBF Redbirds Varsity(18U) and Junior Varsity (15U) teams had the opportunity to go to St. Petersburg. Not only did they get to play some good ball in the type of beautiful weather that is rarely never seen in Alberta winters, but there were several other activities that made this a memorable trip to Florida.  Each team had eight games scheduled into this extended long weekend, as well as the opportunity to meet with some former MLB players, and watch some Spring Training games.

On the first day, both teams played games at the Walter Fuller baseball complex, which is an excellent facility which has been used by the Tampa Bay Rays as their minor league spring training facility as well as Team Canada and has 5 MLB sized fields.

The day started with the Varsity team playing a morning game against the Ontario Terriers Gold team.. Behind the strong pitching of Nelson Lipszyc who threw a complete game against this potent lineup, Jake Derwent who scored twice, and a clutch 2 run pinch hit double in the 7th inning by Joel Campbell, the Redbirds were victorious in their first game, 4-2.
At the same time, the JV team was taking on the 16U Terriers Blue team.  The Calgary bats were  quiet, with Blake Enders driving in the only 2 runs in a 9-2 defeat.


Meanwhile, there was a buzz starting to form in an adjacent diamond.  Paul Quantrill's son, Cal, who is projected to be one of the top Canadians drafted this year, was slated to pitch in the afternoon and several scouts had come out to watch him. I mingled in with the scouts and counted upwards of 20 MLB scouts behind the home plate area with their radar guns and clipboards.

The Varsity and JV teams also played afternoon games, both falling short to the Ontario Terriers. Due to an umpiring scheduling conflict, yours truly was even summoned from the stands to serve as a base umpire for one of the games.  This was more baseball than any of the players had participated in since the end of October.  In spite of the Alberta teams combining for a 1-3 record on the day, it was great just to be outdoors and in the sunshine, and the players all seemed to be in good spirits.

Although both teams only played a single game the following day, they managed to compress even more baseball into it.  The morning started with 7 year MLB veteran, Lyle Mouton talking to all the players, sharing his experiences and giving advice on how to get to the next level. I found him to be extremely well-spoken.  He shared a lot of stories,  and answered several questions (Toughest pitcher to face? David Cone. Easiest? Mike Mussina) and the coaches finally had to cut short the Q&A session, as the players kept asking him questions and they had to get ready for a game.  In a side conversation with him, he mentioned to me that he was good friends with Jim Rice, and left no doubts in confirming the oft-heard reports that Rice could have been on the PGA pro tour if he had swung a golf club instead of a baseball bat professionally.  He stuck around and helped in the dugout during the JV game and kept providing observations on the game and giving nuggets of wisdom, in a game where the Redbirds tied the Winning Inning Academy at 9. Josh Trybuch started and provided 4 strong innings on the mound, while Jake House provided the power with a triple and 2 RBIs and Luke Lepine scored twice.

Meanwhile the Varsity team was facing Florida ProBound which was a team mainly of semi-professionals.  Every player had played at least a couple of seasons of college ball, three players had recently been cut by MLB organizations, and others were playing in professional leagues overseas. Brodie Stairs started on the mound and pitched very well, and in spite of the level of the competition, the Redbirds kept it a reasonably close game, ending up on the short end of a 10-6 decision. This drew praise both from the opponent's coaching staff and players who were impressed at how well this younger team played.
After this full morning of baseball talk and a game, it was over to Dunedin to relax and watch our country's Blue Jays take on the Tigers in a spring training game. A very long day ended with the teams resting up while getting ready for Sunday's games.


The JV team had an excellent day on Sunday.  The morning stared with them beating the Oakville Royals 7-2.   Jake Sakon threw 6 strong innings only allowing 2 runs, while the power was provided by Mike Soroka who knocked in 4 runs.
After the game, it was off to Tigertown in Lakeland to watch another exhibition game.  Not only did the players watch some MLBers in action, but due to Rios' connections with Tigers staff from when he played in the organization  they were able to get a tour of the facility and meet some of the players.
Meanwhile the Varsity team played a doubleheader against the Ontario Outlaws. In game 1, they only managed 3 hits and lost. But they looked much better in Game 2.  They were down 4 runs in the first inning, before starting to fight back. Jake Derwent went 4-4 with 2 triples, while Ty Scott also reached base in all 4 of his plate appearance. Three straight hits in the bottom of the 7th, including an RBI double by Colton Seaman, brought the tying run to the plate with no outs, but the Redbirds ended up on the wrong end of a 7-5 final.

On Monday, the JV team faced the Etobicoke Rangers in their first game.  Owen Steele pitched 4 innings while only being charged with 3 earned runs, but the offense didn't get in gear, only outputting 4 singles and Calgary lost.  In the afternoon, they faced the Oakville Royals again.  In this game they managed to get across three runs.  But playing their 6th game in just over 72 hours, finally caught up to them, as some tired arms led to a 19-3 loss.

Meanwhile, the Varsity team played a late afternoon/evening doubleheader against the Ontario Prospects at Al Lang Stadium.   This is a beautiful park overlooking the Bay, and the New York Yankees, St. Louis Cardinals, Tampa Bay Rays and several other teams have called this home to their spring training teams in the past. 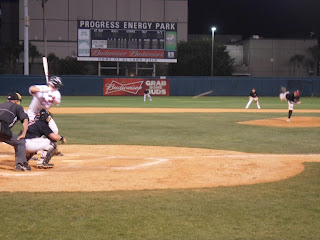 In game 1, Calgary lost 8-7. Joel Campbell was on the mound, and kept the Redbirds in the game. He looked very strong early on, striking out the side each of the first two innings. He pitched into the 6th inning and left in a 7-7 tie, having been victimized by some poor defense as he only gave up 3 earned runs.  Calgary was down early but stormed back with a 4 run 4th inning. The offense was provided by Matt Harris who had 4 RBIs including 3 with a double in that 4th inning, and Nelson Lipszyc who had 3 hits.  Putting his batting gloves away in the nightcap, Lipszyc took the mound and looked very strong in the early going, not allowing a base runner until the 4th inning. Like Campbell earlier, he also pitched into the 6th but left the game trailing 5-3, having given up two earned runs while striking out five.  Matt Harris had three outfield assists in the game, while Colton Seaman scored 2 runs in this narrow 5-4 defeat.

Proving that bad baseball weather isn't restricted to Alberta, Tuesday's games were all rained out and the teams returned from the trip late in the day.

Overall it was a great experience for all members of the teams, and a good way to get ready for the spring season.