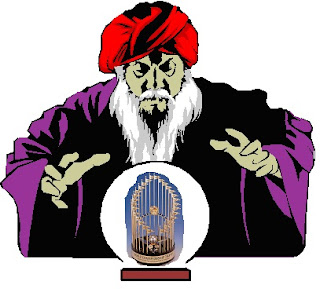 In previous years I have forecasted how the MLB season would play out.  Some predictions were good (Giants / Tigers World Series last year) some not so much (A's / Rockies in 2011).  I've been questioned, mocked and ridiculed but that's not enough for me to stop.

Anyhow, this year, I'm going to take a slightly different approach. Instead of predicting exactly where each team will finish, I am going to go with a 75% confidence interval on number of wins per team.  I will also make some observations and a few unexpected specific predictions along the way. I welcome fans of any of these teams to mock me.  I had a preview on four teams last week, that I have repeated here along with the rest of the MLB teams, listed by division in the order that the teams finished last year:

AL East:
NY Yankees - Their infield DL payroll is higher than several teams' entire payroll. But unlike previous years where the Evil Empire (go ahead and sue me for copyright infringement) would just spend more money on buying some more all-stars, it looks like their opening day lineup may actually include long time Yankee legends such as Eduardo Nunez and Francisco Cervelli, as well as the newly added Vernon Wells. This team is really hard to project. If this wasn't the Yankees, they’d be reasonably expected to be a solid 70 win team. But I know better.
I have no confidence they are going to stick to their self-imposed spending limits for next year. I'll believe it when I see it. My (not-so) bold prediction is that they are going to pay to acquire some much needed pieces and explain that they had to due to all the unexpected injuries. When they do and if all their stars come back healthy and produce, 95 wins is not out of the question. Of course, if they stubbornly refuse to spend and Cano gets injured 70 wins may be a stretch.

Baltimore - They are improved from last year but won't repeat their 29-9 in 1 run games or 16-2 in extras record.  No true pitching aces, but lots of pitching depth. I expect them to finish close to .500 but with a much higher likelihood of missing short by a lot then overshooting by a lot.
Tampa Bay - Best team in division, but won't run away with it.
Toronto - Everyone (north of the border anyways) has already anointed them World Series Champions. Well, fellow countrymen, prepare to be disappointed. Poor defense will lead to most of their pitching rotation underperforming. Their bullpen is, um, below average.  They will act like they are in playoff contention, being buyers at the deadline but will ultimately fall short at about 85 wins. Having said that, contrary to Baltimore, their upside is much bigger then their downside.
Boston - A lot of depth in some places (bullpen, catching, outfield), not enough in others. With injuries to Ortiz and Drew to start the season, they will have among the league's best defenses with an outfield of JBJ, Ellsbury and Victorino, and Iglesias at shortstop. This will benefit their pitching staff. Injuries to Pedroia, Middlebrooks or one of their key starting pitchers for an extended period of time may be insurmountable. But if they stay healthy, there's enough depth to cover injuries elsewhere on the field. If everything goes right this team could win the division with over 90 wins. Of course, this is also a team that won 69 wins last year and didn't exactly make any blockbuster moves in the offseason. I expect them to be in contention all season.

AL Central:
Detroit - They won't face much of a challenge for the division. Going out on a limb and predicting that Justin Verlander will be a very good pitcher. Torii Hunter, however, will not live up to expectations, his best days being behind him.
Chicago White Sox - They will continue their every other year pattern and regress down to 75 win territory.
Kansas City - Best team in division who doesn't have a reigning triple-crown winner playing for them. Lots of games against weak opponents will help them get to .500, but they will never seriously contend for a wildcard spot and will be too far from Detroit.
Cleveland - Lots of changes starting with a new manager. But early on they will fall out of contention, and players will start focusing on their own stats, rather than trying to win. Tito will wonder what he got himself into and will be thinking fondly of the good old chicken wing and beer days of September 2011 (maybe not that last part). They will end up well short of .500, and last place in this division.
Minnesota - Most improved team in the division. Will battle KC for 2nd place.

AL West:
Oakland - Was last year in a fluke? If so what will you call back to back division crowns?
Texas  Gone are Josh Hamilton, Mike Napoli and Michael Young and their 75 home runs. La plus ca change…. They should still win about 90.
LA Angels - Trout will not repeat his rookie campaign. That's not such a tough prediction, because he had one of the best seasons in recent history, matching Ted Williams' best season ever, with his 10.7 bWAR.  And I'm also not predicting that he'll go the way of previous ROYs such as Joe Charbonneau who was never heard from again, but I expect merely a very good season from him.  A 280/350/475 triple slash line which the LA media will make a big deal about, but is actually very good putting him in Top 20 range for OPS+.  But not enough as again the Angels will miss the playoffs, and Mike Scioscia's time in Disneyland might come to an end.
Seattle – Will benefit by playing Houston 19 times and no longer being the worst team in the division.  Added some potential power with Michael Morse, Jason Bay and Kendry Morales. Their pitching is led by King Felix and um, some other guys, I guess.  A couple of breaks and they could catch the Angels but don’t think they will.
Houston - In a division with Oakland, Texas, LA and an improved Seattle, they may go entire months without a victory. It will be a minor miracle if they avoid 100 losses. If I miss on my interval I fear it will be because they undershoot the low end.

Washington - This team won 98 games last year. They won't have to wait until May to get Harper, and Strasburg can pitch all season. They'll be lucky to win 90 this time.
Atlanta – Dale Murphy didn’t get elected to the Hall of Fame in his last year of eligibility, Chipper Jones retired, Michael Bourn left as a free agent and Brian McCann will start the year on the DL.  Not the best offseason for Braves fans. They did get BJ Upton, and Craig Kimbrel might be the best closer in the game but he won’t have the opportunity to get a lot of saves.  They’ll end up closer to .500 then they will to 100 wins.
Philadelphia - This was an old team last year, and their age showed as they stumbled to their worst record in over 10 seasons.  Ruben (what a great name!) Amaro Jr got the memo that he was to sign young players and went out and got a couple of them. Unfortunately it seems that there was a misunderstanding.  The young guys he signed were Michael and Delmon YOUNG. Michael is 36 years old, and Delmon plays stellar defense... for a DH. Which the Phillies can't use. But this team played great in the 2nd half last year when they were healthy. This year's outcome hinges on Roy Halladay. If he's the Roy of old, he can anchor their rotation to a division title. If he's not then they have some big shoes to fill.  I'm picking the Phillies to return to the top of the AL East.
NY Mets – As bad as they’ve been, it’s been 10 years since they had a sub 70 win season.  They could break that streak this year.  Jon Niese is their opening day starter - ‘nuff said.
Miami- Last year's 69 win squad will be missing Hanley Ramirez, Jose Reyes, Josh Johnson, Mark Buerhle, Anibal Sanchez and more. When they added all those guys they took a step backwards, so by that logic they should improve.

Cincinnati – Joey Votto and .400 will be mentioned together in the same sentence a few times this summer. They don’t have the Astros to beat up on, but the rest of the division is getting weaker too, should run away with it again.
St. Louis-  No wildcard is coming from either Central division this year.  Could be sellers after the all-star break.
Milwaukee – I think signing Kyle Lohse might have been the whole acquisition they made all winter, but that might be enough to pass St. Louis.
Pittsburgh – Almost hit .500 last year. Is this the year? It would be a lot easier if the Astros hadn’t left the division, but they will break their 142 year losing streak(*)
Cubs – Will Theo bring a Championship to the north side of Chicago in his 2nd year, like he did in Boston?  If you believe there is even a chance, you should probably be reading Bleacher Nation instead. Astros aren’t around to keep them out of last place.
(*) going by memory, I didn’t look it up

San Francisco – This team has won two Championships in last three seasons. Tough to bet against them, with their starting pitching. Their offense doesn’t scare anyone, but always seems to come through.  They’ll hit some rough patches, but will be on top again at the end of the season.
LA Dodgers – They’re spending money like a bunch of drunken Steinbrenners. They have a ton of pitchers who all could be aces, and their offense is much better than the Giants.  But they still won’t catch them.
Arizona – After winning 65 and then 94 games, they split the difference and won 81 last year.  Which way will they go?  They lost Justin Upton, but added Cody Ross, Martin Prado and Brandon McCarthy among others. They will improve, but not enough to win the division. Will be in the wildcard hunt until the end.
San Diego –  A quiet offseason, except they’ve moved the fences in at this pitcher friendly ballpark. I suspect Padre pitchers can’t be happy about that, because they were well below average in spite of that.  They’ll battle Colorado and the Mets for the worst pitching staff in the league.
Colorado – This team can score some runs. But they can’t stop other teams from doing so. Not a winning recipe, but a couple of good arms could push them towards respectability.

I hate to do this, but will have to again…. Late October Parade route will go down Pete Rose Way after the Joey Votto led Reds defeat the Joe Maddon’s Ray in this year’s Fall Classic.
Posted by Baseball Ruben at 18:00