As mentioned previously, the Cardinals blog C70 at the bat at Cards Conclave hosts an annual series where bloggers from each team answer some specific questions in previewing their team's seasons.

As in previous years, other bloggers also participated including fellow Baseball Bloggers Alliance members Mike from Seamheads, Christine from Boston Red Thoughts, Nate from The Loyal Bostonian and John from The Mighty Quinn Media Machine.

To see how these Red Sox bloggers answered these questions, take a look at the Red Sox Playing Pepper page at C70 at the bat.

Below are the questions with the answers that I provided. As always, I welcome your comments and thoughts:

1.Was it a good offseason for the team?  Did they do what they needed to do?  Is there any move you wished they had made that they didn’t?
No, sort of and maybe.

It’s very difficult for any offseason that involves the retirement of a legend to be considered good. The only way it could have been, is if at some point David Ortiz said “j/k, I’m coming back!”. Unfortunately, that did not happen.

There was no way for the Red Sox to be able to replace what David Ortiz meant to this team.  Rather than spending a lot of resources to try the impossible task of replacing the hole left in the lineup by his retirement, they improved in other areas. Most notably was the trade for Chris Sale.  Our starting rotation now boasts three perennial Cy Young award contenders plus two 2016 all-stars. The acquisition of Tyler Thornburg was an under-the-radar move that will shore up the bullpen, and signing Mitch Moreland to play first base will make Hanley Ramirez the everyday DH.  Losing Yoan Moncada for Sale was something that they did need to do now.  Moncada may become a perennial all-star headed towards a Hall of Fame career, but the Red Sox are contenders in the immediate future, and the acquisition of Sale will help them reach the World Series more than having a top prospect with a high ceiling would.  (This is very similar to giving up Hanley Ramirez for Josh Beckett. Ramirez provided more value in total over the next several seasons, but we won a ring in 2007 with Beckett.  This is NOT Bagwell/Anderson redux).

The only major question mark on the team is 3rd base. A lot of hope is being placed on Pablo Sandoval coming back from injury and returning to his previous playing level. But if he falters, our hot corner options are limited.  It would have been nice to sign someone as an insurance policy, but realistically it would be a waste or resources if Sandoval bounces back, or if it was someone acquired cheaply probably not much better than in house options. So while I wish we had signed a Trevor Plouffe or Luis Valbuena or even traded for Todd Frazier, it just wasn’t realistic.  You can’t have a backup star player at every position in case your starter doesn’t pan out.

2. 2017 starts the post-David Ortiz era. How different will that be for you and for the team? 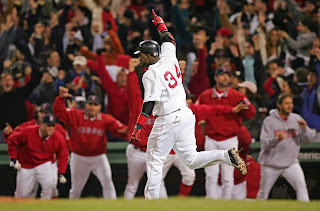 The last time Boston entered a season without David Ortiz was 2002, when the nation was still reeling from 9/11, and the Yankees had been to five World Series in the previous six seasons. Meanwhile the Red Sox had been to four (losing them all), in the past 84 years.  Since then, Big Papi has led Boston to three Championships (their only ones since 1918) and it would be an understatement to say that has changed what it’s like to a Boston Red Sox fan.

For me, it will be different not being able to think that no matter how far down the team is, if we can just get Ortiz an at bat we still have a chance of winning the game. The team will obviously miss his offense as well as his leadership.  I expect Dustin Pedroia (amazingly at only 32 he’s now the oldest player on the roster), will do his best to fill that leadership role.

3.What’s the thinking on Craig Kimbrel? A bit of an off year or the beginning of a decline?
I might be one of the few Red Sox fans who doesn’t think Craig Kimbrel had an off year at all last year.  I think he had two bad appearances that made his numbers look bad. Look at the following:

Is there a big difference between the two sets of numbers?  Set A is Craig Kimbrel’s career numbers. Set B is what he did last season with the Red Sox, excluding the aforementioned two poor appearances.  In general, I’m not a fan on cherry-picking stats (as in an extreme case you can just ignore all the at-bats where your favorite hitter didn’t get on base and prove he’s a 1.000 hitter!), but relief pitcher numbers can very easily be swayed due to factors outside their control.  One of the games I excluded from his numbers above came on September 28th at the Bronx. That was the day they clinched the division title, before the game finished.  He came in to the game with a lead in the 9th, loaded up the bases, walked in a run and was promptly pulled.  His replacement, then gave up a walk-off grand slam, giving Kimbrel a 0 IP, 4 ER line.  If the following reliever had induced a double play ball, Kimbrel may have only been charged with the one run he walked in.
Also, Kimbrel has a reputation for not pitching well in non-save situations.  The game above, however, was one.  The other bad outing he had was on July 5th against the Rangers, when he came in down 3-2 and again gave up 4 runs without recording an out. Maybe that was where his reputation for not being dependable in non-save situations came from, but I think that’s just a small-sample-size / confirmation bias conclusion.
In short, I think he’s every bit as good as a pitcher as he’s always been, but it’s unrealistic to expect him to go an entire season without giving up a run or blowing a save, which is why the Boston media soured on him early on.

4.Is there an unheralded player that people should keep an eye on this season?
While the obvious answer here might be Andrew Benintendi, I don’t think he can be considered unheralded anymore, after what he showed at the end of last season, and being ranked the #1 overall prospect by MLB.com and ESPN’s Keith Law among others I think Tyler Thornburg is going to be a light out set up guy. (I loved what he did last year, before knowing he’d be in Boston this season) Along with Carson Smith, once he returns, and Joe Kelly, this will give us a solid three-headed monster to fill the gap between the starters and Kimbrel in the fall.   With all the talk about the strength at the top of the rotation, and the offense our youngsters provide, a shutdown bullpen may be the difference maker in the fall.

5.What’s your projection of the team’s record and/or where will they finish in the division?
Injuries and other unexpected events always make this a challenging question to answer with any level of confidence. However, for the first time in about ten seasons, I am confident in predicting a division championship this year. Not necessarily because they have improved, but I don’t see any other team in the division that can seriously challenge.  If everything breaks right for the Red Sox, they could potentially win 100 games for the first time in my lifetime, but that is not likely. However, it would take a lot of things to go wrong simultaneously for this team to fall much short of 90 victories, and I believe that will be more than enough to take the division.  If I need to pin down a specific number, I’ll take 93 wins and winning the division by six games.

6.Who is your all-time favorite Red Sox and why?
Jim Rice, Jim Rice, Jim Rice. I could write a whole website on this (actually, I already did!). Short version is that as a youngster I saw him play for the Red Sox and thought that despite him winning an MVP and getting constant all-star recognition he was underrated. He was a good baserunner and had a good outfield arm, but had an unwarranted reputation as a slow and poor fielder. I helped lobby him to get elected into the Hall of Fame, and glad I was at Cooperstown when he finally got inducted.