As mentioned last week, I got my hands on the latest version of OOTP.  And like I did last year, I started simulating the current season, by naming myself as Red Sox manager. While last year I played the season slowly, starting around Opening Day and finishing during the playoffs, this time I wanted to run through it quickly, in the week I had between getting the game and Opening Day.

The season started great. By April 20th I firmly had the Yankees in the rear view mirror, already having a 5 and a 6 game win streak. This was largely fueled by Mookie Betts who was on absolute fire, winning April’s player of the month award. And then it happened!

Mook hurt himself and was going to be out of the lineup for almost two months. This had a compounding effect on the lineup. JD Martinez would need to play defense in the outfield every day, even in large parks. Hanley and Mitch couldn’t be platooned any longer. Could the Red Sox offence hang on?

Well, that turned out to be the least of their worries. Within about a 6 week period, we lost Eduardo Rodriguez and Craig Kimbrel for the season, as well as some other arms. And this after I had traded away Brian Johnson because we had too much pitching* (anyone remember Bronson Arroyo?)

* Actually, I traded him because I needed a spot when EdRo initially came off the DL. He couldn’t be optioned to Pawtucket without clearing waivers. I figured it was better to get something for him, then lose him for nothing. The real Red Sox are going to be facing similar issues this year. When EdRo, Pomeranz, Wright, Pedroia and Marco Hernandez are ready to play, they will need to make some tough decisions because most of the guys they will replace can’t be stashed in the minors for depth.  This is part of what makes this game so great. It gives full control over roster moves, and they mimic the real-life MLB limitations. You can’t send Pablo Sandoval to the minors to open up a roster spot for a Rafael Devers, and then just keep him there just in case.

A lone bright spot in the rotation was Drew Pomeranz throwing a no-hitter in the middle of June: 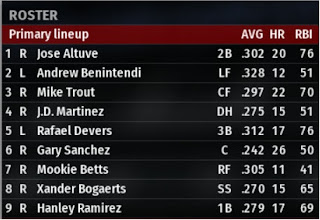 But our offense somehow kept carrying the team, and we were hanging on to the second wild card spot at the all-start break, and had SIX players in the American League's starting lineup.
Shortly after that, our pitching could no longer keep up and by the trade deadline we were in third place, and barely fighting for the last playoff spot. I got desperate, and since I had the luxury of only planning on playing one season, I traded some top prospects to the Twins to get Ervin Santana and Addison Reed to bolster our starting pitching and bullpen.

They helped a bit, but despite a valiant effort, the Red Sox finished with 89 wins and just missed the playoffs. The Yankees, led by Judge and Stanton’s combined 120 home runs won the East, with the Blue Jays getting a wildcard with their 93 wins. Indians took the Central easily, and in a bit of a surprise, the Mariners beat out the Astros with 92 wins to Houston's 90 which was one more than the Red Sox for the last wildcard. Some Red Sox season highlights included Andrew Benintendi taking the batting title, and Rafael Devers knocking in 136 runs.

Now that the real season is about to start, and I'll replay this at a more leisurely pace, and try to get the Red Sox in the playoffs.

Meanwhile, take advantage of 10% off launch week to get your own copy until March 29th 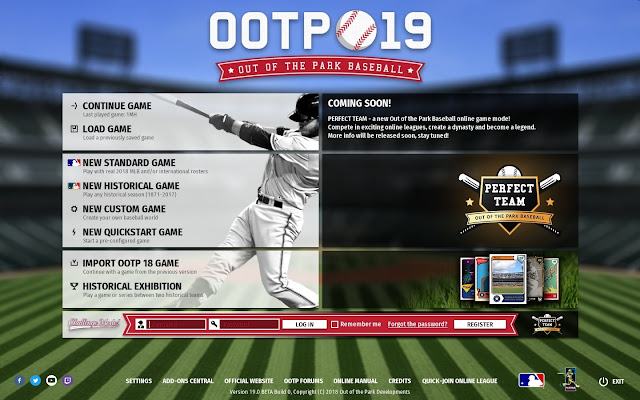