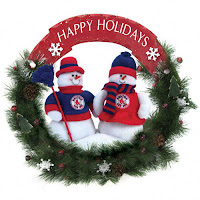 But I'm thinking of something that happened hundreds of years ago.
Or so it seems.  Yes, I'm talking about the last post-season Series that the Boston Red Sox won.  And why am I thinking of that?  It's because, BASEBALL IS AWESOME, and no better time to be reminded of that that in the middle of winter.  As promised at the beginning of this series, these articles will all be about Canadian related moments in Red Sox history, and this one is no exception.

This was a game played on October 6th, 2008 at Fenway Park.  John Lackey started and pitched well, going 7 innings while only giving up 2 runs (he used to be a good pitcher, but of course he was on the mound for the visiting Angels that night).  Lester pitched better, not giving up a run through his 7 innings, but in the 8th our bullpen allowed the tying runs to score.  To the 9th the game went, and Kendry Morales led off with a double and Reggie Willits pinch ran for him.  Things weren't looking good but thankfully Mike Scioscia put on a bunt play that was successful, but didn't really help his team's chances of  winning (if you haven't yet, PLEASE check out Tom Tango's awesome book Playing the Percentages in Baseball

to get a better understanding of why).  But the go ahead run was on 3rd base and things were still a little tense.  But not done playing small ball, with Erick Aybar at the plate, Scioscia then tried the suicide squeeze to score a run.  But Aybar missed the pitch and as the name suicide implies, Willits was dead at the plate.  Aybar then grounded out to first base weakly ending what started off as a promising half inning.

You could hear the buzz going around Fenway as the Red Sox got ready for the bottom of the 9th.   There had only been a few walk-off series clinching hits in history and all are well remembered years and even decades later.  Just mention names such as Bill Mazeroski, Chris Chambliss or Joe Carter and immediately people start reminiscing about their one big hit which won a series or pennant or championship for their team. Those at Fenway that night were hoping to see another such moment.

With one out, Jason Bay came to the plate.  The Canadian had only been wearing the red B on his hat for a couple of months, acquired as part of the Manny Ramirez trade.  Ironically enough, Boston's last walk-off post-season win, was the previous year when Ramirez had hit a 3 run home run off these same Angels. But as dramatic as that win was, that only gave the Sox a 2-0 series lead, whereas a win tonight would clinch the series.  Bay had been the offensive star of these playoffs for the Red sox.  He had been the hero in game 1, with a 2 run home run to give the Sox a 2-1 lead,  and had gotten Game 2 off to a good start with a 3 run shot in the 1st inning, in a game Boston held on to win 7-5.   Could he do it again?  Well, not by himself, but he did hit an automatic double (*) that bounced over the right field wall and put himself in scoring position.  Mark Kotsay then hit a line drive that Teixeira snagged at 1st base and there were 2 outs.  One more chance... and the rookie Jed Lowrie was up.  He only batted .222 against righties in his inaugural season, but at least he wasn't Julio Lugo.  Lowrie swung at the first pitch he saw and he managed to get enough wood on the ball to hit a squibbler between 1st and 2nd into right field.  With 2 outs, Bay was running on the crack of the bat, and although his speed will never be confused with Ellsbury's, he was waved around 3rd base and dove into home plate... just ahead of the throw as he scored the series clinching run! 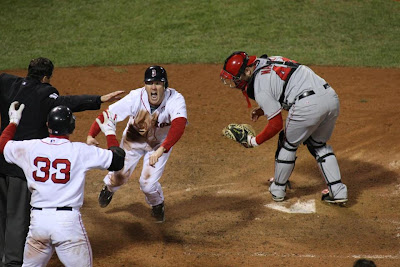 Another reason baseball is awesome.  You never really know how trades are going to turn out. A player who is among the best right handed batters in the history of your franchise is traded away due to issues other than on-field performance, and his replacement ends up being the hero in that season's ALDS.

Oh, yeah, almost forgot.  Happy Holidays everyone!
Epilogue:  The Red Sox then faced the surprising Tampa Bay rays in the ALCS.  It was an exciting series which included a 7 run comeback while facing elimination in Game 5, but the Red Sox eventually lost in 7 games.  They haven't been to the playoffs since :(

(*) Sorry, that was the umpire in me talking.  He hit what is often erronously referred to as a "ground-rule" double.  There is no ground rule covering a ball landing in fair territory and then bouncing over the fence.  That is just an automatic double. Feel free to look up rule 6.09(e).
Posted by Baseball Ruben at 11:39